"I was really proud of our guys today," NP coach Shawn Alspaugh said. "We started out slowly, really struggling on the front nine; other than Logan Grim's 40, no one did better than a 43 on the front. We had a lot of penalties and some really big scores that are hard to come back from."

Alspaugh was pleased with how his players regrouped and performed much better on the back nine.

"We really focused and turned things around on the back nine, found a way to get some pars, and put up some good scores on the back, including Austin Judy's 38 and Preston Porter's 40," Alspaugh continued.

"A lot of these schools are sectional opponents, so it's good to see where we stack up partway through the season," he added.

Austin Judy shot a 40 to lead the North Putnam golf team to a 176-199 victory over Cloverdale on Monday at Twin Bridges.

Jake Holtze added a 43 for the 5-1 Cougars, whose top four players all scored below 50.

Chase Snyder shot a 46 to pace the 2-3 Clovers, with Zach Nichols close behind with a 49.

Cloverdale coach Doug Wokoun was not happy with his team's performance.

"This match was a real disappointment in the sense that we have made very little progress over the last three weeks," he said. "Inconsistent play is killing us right now, and we can't seem to find a way to overcome it. Everybody had a couple of pretty good holes, but we had enough bad things happen that we couldn't overcome them."

The match was played in difficulty windy conditions.

Jake Buis led the Tiger Cubs with a 42. South's Jake English was the medalist with a 37.

"We had tough playing conditions, with strong winds and fast small greens," Greencastle coach Steve Paquin said. "We continue to struggle hitting greens in regulation due to poor execution in ball striking. Putting also is an area where we have too many three putts which end up as double bogeys."

Paquin noted that his team is young, and many of the courses the Tiger Cubs are playing are new to them.

"Keeping the ball in play is also an area where we need to improve," he said. "This is a young team that has problems playing new courses, but will improve as the season progresses.

Next match - Today at Windy Hill CC against Tri-West at 4:30

Cascade jumped out to a 6-1 lead after four innings and held on for an 8-2 win over Cloverdale on Monday in high school softball action.

Kelsey Helterbrand had two singles for the Clovers.

"We made too many mental errors against a really good Cascade team," coach Jim Spencer said. "They made us pay for every physical and mental mistake."

The Greencastle Middle School split a pair of track meets with Owen Valley on Monday. 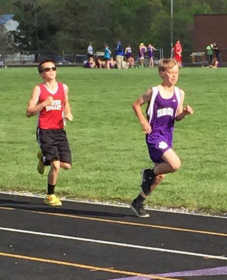 Highlights in the boys' meet for Greencastle were Dakota Campbell breaking a 27-year-old stadium record with a jump of 19-2 in the long jump and Ian Frank winning the 2400 meters with a time of 9:05.

Highlights for the Greencastle girls' team included Allison Stevens breaking the school record in the long jump with a jump of 14-6, only to see teammate Kennedy Trigg beat that mark with a leap of 14-8 on her final attempt.

The Cloverdale Middle School track teams participated in a triangular meet along with Monrovia at Southmont, both earning second-place team finishes.

Winning events for the Cloverdale boys were Brett Batchelor in discus at 107-1, Brayden Blevins in the 1,600 meters at 6:11, Chase Ashcraft in the 800 meters at 2:43 and the 4x100 relay team consisting of Trevor Woods, Da'Shawn Highbaugh, Josh Beikman and Ray Bates with a time of :53.8.