BRAZIL -- Tuesday marked the fourth conference game out of five for both Greencastle and Northview as the Western Indiana Conference slate nears its conclusion.

Both teams entered play with banged-up lineups, but it was Northview that got the most bang out of its offense in an 8-6 victory.

The Knights and Tiger Cubs each had several players playing out of their traditional positions on defense, but both squads stepped up in key spots. 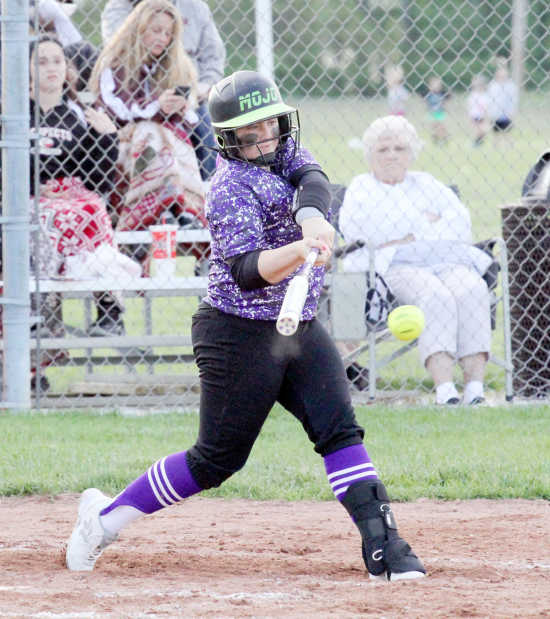 Kenlee Johnson smacks an RBI single in the fifth inning for Greencastle on Tuesday evening.

"I mixed up the lineup tonight because I've had so many injuries to my varsity so I had to move some people around," Greencastle coach Tabatha Briones said. "Everyone that I moved into new positions stepped up though and played well. It was really rewarding."

The Knights jumped out to a 3-0 lead in the first inning as Addy Thompson was hit by a pitch to start the game. Stacy Payton was walked and would eventually steal both second and third as Thompson crossed the plate on a wild pitch. Ellie Jackman followed with a two-run double to put the Knights on top early.

Neither team had problems on the offensive side of the ball.

Greencastle might have trailed early, but roared back with two runs in the second and added the tying tally in the third.

The Tiger Cubs manufactured its two runs in the second on a pair of fielders choice grounders by Kenzie Horton and Gracie Foster and a throwing error that put both runners in scoring position. Layna Robinson hit an RBI ground out and a passed ball scored Horton.

There was no such manufacturing to plate the third inning as Kenlee Johnson used some old fashioned muscle to send a liner over the left field fence to tie the score at 3-all.

Briones was pretty happy with a Tiger Cubs' attack that had eight hits and eventually tallied six runs.

"The other thing that we've been working on is hitting so I've been fortunate enough and tonight was a good hitting night for us," Briones said. "I thought Northview played great defense and came out hitting the ball. They played the short game really well and that was something we struggled with the second half of the game."

The second half of the game was pivotal for the Knights as base hits by Parker Spears, Makayla Sparks and Addie Thompson set the table for a screaming two-run double off the wall by Stacy Payton.

Parker Spears and Sparks each had RBI hits in the fifth inning as Northview stretched its lead to 7-4.

The Knights added a controversial insurance run in the bottom of the sixth.

With two outs, Ellie Jackman served up a flyball into shallow centerfield that appeared to be caught as a pair of fielders made contact in pursuit of the ball. However, neither official could make a definitive call and the batter was ruled safe. Jackman would come around to score on a fielding error for an 8-4 lead.

Greencastle wasn't quite done with its rally however as a single by Grace Paul and an RBI double by Skyler Hensley brought home a run.

Foster would single home another run, but was thrown out to end the game trying to stretch hit into a double.

The win boosted the Knights' record to 4-1 in WIC play and Greencastle slips to 1-3 in conference play.

"Winning in the conference is always good and it marks our 10th win of the season, which is the most wins we've had in the past three seasons," Vossmer said.

Next game: Greencastle plays at Riverton Parke on Friday.By