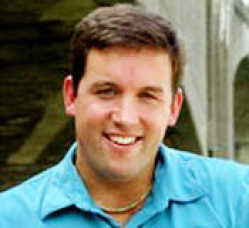 Campaigning under the slogan "the stakes are too high for politics as usual," John Crane made that notion come to life Tuesday by upsetting incumbent District 24 State Sen. Pete Miller in the Indiana Republican Primary.

Crane made a strong Putnam County showing Tuesday, coming within 88 votes of the incumbent here, but lambasted Miller in Hendricks County -- which they both call home -- by more than 3,000 votes to roll to victory.

The Putnam County margin was 1,868-1,780 in favor of Miller, a Brownsburg Republican who was initially appointed to the District 24 State Senate seat when Connie Lawson (R-Danville) was named secretary of state. Miller then won re-election in 2014.

"I have to confess," Crane told the Banner Graphic Tuesday night via telephone after his victory was secured, "I was surprised. Surprised and grateful."

Crane, who visited several Greencastle and Putnam County precincts Tuesday, credited hard work and "a very enthusiastic and dedicated group of grassroots volunteers" in spelling the difference between victory and defeat.

About 85 percent of his volunteers, Crane said, "had never done anything politically before," while 60 percent were younger than 30.

"I am humbled and surprised by the level at which we won and the amount of votes we won by," Crane added.

Saying he ran a campaign "that honors God and respects the process," the first-time political candidate stressed, "I take very seriously the mantle of responsibility, and by God's grace will live up to it and get positioned to lead well."

Although the State Senate campaign was his first shot at public office, Crane's family has been in politics for a number of years and his uncle, Phil Crane (R-Ill.) was even a one-time GOP primary candidate for president.

Meanwhile, he said he isn't sure what turned the tide and made voters look to him to lead instead of Miller.

"It's hard to know," Crane said, agreeing that educational issues were high on the list.

While there is currently no Democrat District 24 candidate on the ballot, the party will have time to appoint one prior to the November general election. Crane nonetheless knows that the 2017 legislative session will be focused on the budget. Transportation infrastructure and, of course, educational issues will also dominate, he said.

Crane said he hopes to get back to the Greencastle area as soon as possible to "thank the good folks of Putnam County for taking a chance on the new guy."

"I need to catch my breath and get some sleep," he offered.