Walton: Back to work after primary win 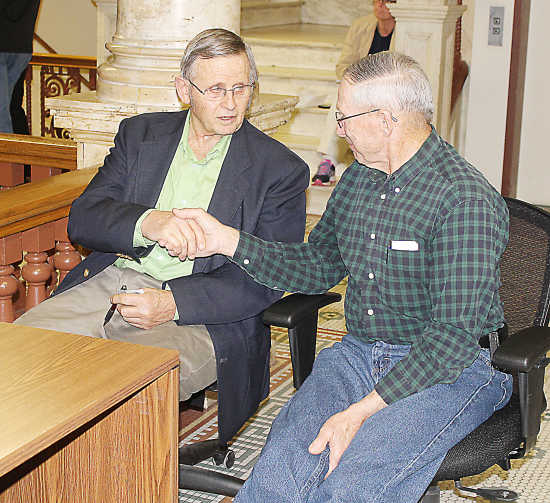 With pen still in hand after a night of tallying results, District 3 County Commissioner Don Walton (left) gets a handshake from County Councilman Larry Parker as final vote totals are announced Tuesday at the Courthouse. Walton took the Republican nomination for the District 3 seat by 388 votes over challenger Mike Clark. Parker was one of three incumbent Republican councilmen on the ballot for three at-large council seats. (Banner Graphic/JARED JERNAGAN)

With a solid primary win behind him, Commissioner Don Walton is ready to get back to work.

While the 388-vote margin may have been closer than Walton would have liked, the incumbent had the lead after three reporting precincts and watched his lead grow steadily throughout the night.

Walton observed that he may have had an advantage in running against someone who's lived in the county for just two years. However, he added that Clark's role as Cloverdale town marshal gives him contacts and name recognition.

"I was well pleased with the results that we did win and we'll be back this fall," Walton said. "I'd like to thank the voters of Putnam County."

Walton is hoping to continue his work as commissioner, but still has a general election to contend with.

"We'd like another four years, but we have to get through the fall first," Walton said.

There was no Democrat on the ballot in District 3, but the party has until Tuesday, July 5 to nominate a candidate.

Either way, Walton has the current term to finish out between now and Dec. 31.

"I'm looking forward to finishing out this year and getting what road and bridge work we can done," Walton said. "We have a lot of work ahead of us."

Clark issued a statement thanking voters for the support and congratulating Walton on the nomination.

"I would like to thank all of the people that supported me in my campaign," Clark posted on his Facebook page. "Unfortunately we did not come out on top. I would like to congratulate Don Walton on his victory."

The marshal found himself in hot water just days ahead of the primary when he was indicted in Cass County on three felony theft counts.

The charges spring from alleged misappropriation of funds related to Clark's tenure as marshal of the Town of Galveston. Walton had little to say about the controversy surrounding Clark.

"It's very unfortunate the situation he has," Walton said.

In spite of the arrest, though, Clark surprisingly won 12 of 31 precincts. Many of Clark's wins came in the northern part of the county, with Clark taking seven of the nine precincts that compose the North Putnam School District.

However, Walton won handily on the two men's home turf, Cloverdale Township. The incumbent took 68 percent of the vote in the three Cloverdale precincts.

Walton's 276-vote margin in Cloverdale comprised more than 70 percent of his total margin.

Although no other contested county races were on the ballot, Tuesday's results confirmed the Republican slate for the GOP election.

Other county Republicans on the ballot include incumbents Matt Headley for judge of circuit court, Lorie Hallett for auditor, Dave Brown for coroner, David Berry for District 1 commissioner and Gene Beck, Phil Gick and Larry Parker for county council at-large.