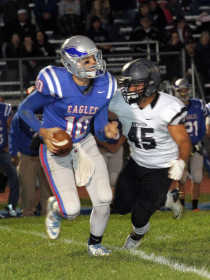 South Putnam senior quarterback Grady McHugh scrambles away from pressure during the first half of Friday's game against Northview.
Order this photo

Grady McHugh grew up knowing he wanted to either play college football or college baseball, and the South Putnam senior fulfilled at least one of his dreams on Thursday by signing a national letter-of-intent to play football for the College of Wooster -- a Division III school in Ohio.

The Fighting Scots compete in the North Coast Athletic Conference, along with DePauw and Wabash.

McHugh, who quarterbacked the Eagles to an 8-4 record last fall, completed 60 of 127 passes for 1,080 yards and 11 touchdowns with only seven interceptions. His longest pass was 76 yards.

He chose Wooster for several reasons.

"I decided to go there based upon the feeling I had after visiting the campus several times," he said. "I really liked the players, the coaches and the campus. I like the opportunity it presents to play college football, and I also like the academic side."

McHugh is considering biology as his field of study, with an eventual goal of going into physical therapy.

"Since I was in grade school I had that dream," he said, "and I'm happy to be able to play football next fall at the College of Wooster. Hopefully I will be able to play baseball too."

McHugh looks back fondly upon his Eagle career, and he is proud that he has had the chance to wear the red, white and blue.

"I had a lot of fun with it," he said. "I played quarterback, and I think we had a great team all four years I was in high school.

"I'm glad to be able to have come through South Putnam and play for the coaches I have gotten to play for, and to be an Eagle."

Reporting day for camp at Wooster is August 11, McHugh said.

South Putnam coach Nathan Aker knew he had something special in McHugh when an injury two years ago forced the sophomore into a huge role.

"He stepped into a really high-pressure situation at the end of his sophomore year when we had an injury at quarterback in the sectional championship and took over the team and led us to a sectional title," Aker said. "In our offense and what we are trying to do, he did a great job for us."

Aker is proud of McHugh for being a well-rounded person as well as a player.

"He set a goal of being a college football player a long time ago and it's great to see him get the opportunity," Aker said. "This day is the culmination of those efforts, and it's exciting for him."

Aker noted that McHugh is active at school, maintaining a high grade-point average as a three-sport athlete while also serving as president of the Fellowship of Christian Athletes. 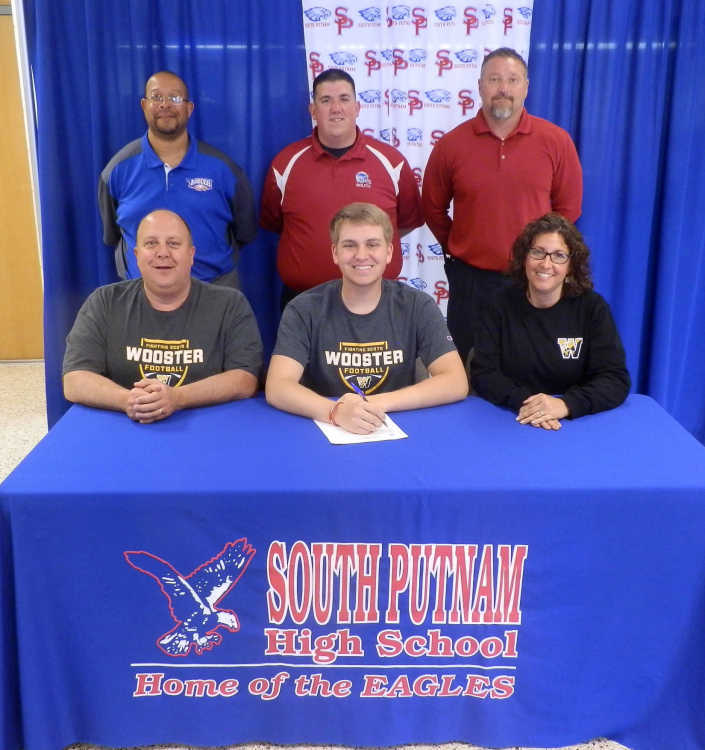 Grady McHugh (front, center) is flanked by his parents Mike McHugh and Ronda McHugh as he signs his letter-of-intent to play football for the College of Wooster. Witnessing the signing (back, from left) were assistant coach Brian Baker- Watson, head coach Nathan Aker and athletic director Troy Burgess.
Order this photo

"He can also serve as a role model for the younger kids in our program to give them someone to look up to."