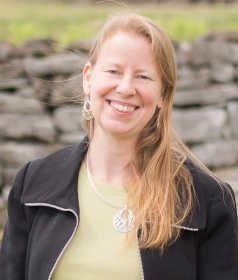 Karen Martoglio has always been interested in community service.

Between the League of Women Voters, Master Gardeners, school involvement and the Greencastle Farmers Market, Martoglio has been involved since she and husband Rich, a DePauw professor, came to Greencastle.

With this background, she sees here new role at the executive director of Mental Health America of Putnam County as a great fit.

"I've always been interested in mental health," Martoglio said. "It seems like something our society has struggled with.

"Having a position like this in Greencastle is fortunate because then you can focus on the issues that make a big difference in peoples' lives. I'm glad everything fell into place for this position."

The board hopes the hiring will bring stability to the organization. Longtime Executive Director Eileen Johnson retired a year ago, but has since returned twice as the board struggled to find a longterm replacement.

On the job for about three weeks now, Martoglio is already getting a pretty good idea of the direction MHAPC needs to take in the future. Prime among such questions is defining exactly what membership in the organization means and making it clearer what the organization does.

A prime example is the MHAPC Puppet Power program, which takes high school volunteers into local elementary schools and preschools. The focus of these presentations is to help Children make better and more informed decisions about serious issues they may encounter.

However, Martoglio has come to realize that while such education is important for the children, something simple like an accompanying pamphlet can also let parents know what their kids have learned and let them know more about MHAPC.

A computer consultant by training, Martoglio said organization is her strong suit, and she hopes to bring that influence to bear on MHAPC.

A tech-savvy leader may be just what the organization needs to get its message out to more people. Part of the problem is people just don't know that Mental Health America is in the community, much less what it does.

"I told Eileen, 'If I would've known about this organization, I would've been involved 10 years ago.'" Martoglio said. "I just didn't know about it."

Another important program MHAPC provides is the Children and Divorce and Parents and Divorce classes.

The court-mandated program assists both parent and child in understanding the impact that divorce has on children and the role of parents in developing and maintaining healthy relationships, while trying to offset the potential impact that divorce can have on all family members.

"I think it's a valuable service and it's nice that it's offered," Martoglio said.

The first big event of Martoglio's tenure is coming on Monday, May 9, as DePauw School of Music Dean and President-elect Mark McCoy speaks about Music and Mental Health.