As if more superlatives were necessary in the wake of Greencastle High School's most recent Indiana Academic Super Bowl success, a closer look at the titles and the students who earned them does just that.

Currently, three GHS teams are now on championship streaks. Eight students have had two or more title roles to include on their college resumes. And the addition of three more state championships Saturday (English, Interdisciplinary and Science) means the ante has been upped to 25 total titles all-time for GHS.

And besides the three title teams celebrating Saturday, the GHS Math team came oh so close.

Despite placing fourth in the Class 3 division, it actually had second highest score in the class with three other schools tied for first. GHS Math team members who competed at state were Simon Foss, Sam Savage, Nick Seaman and Zach Wilkerson (captain). The Math squad is coached by Samantha Burke. 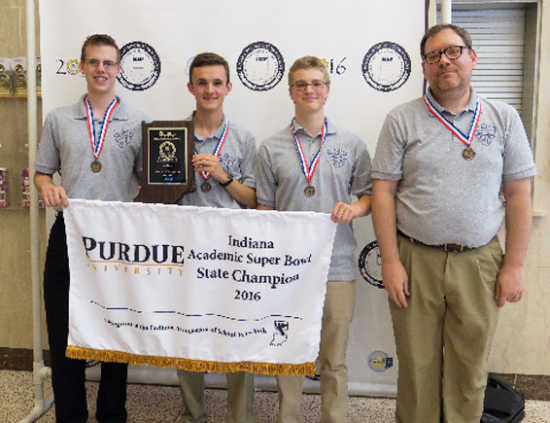 While English and Interdisciplinary grabbed the headlines with their fourth straight state titles, it was a great day for the Brad Kingma-coached Science squad as well.

"This was the second year in a row for Science," Kingma said. "We were trailing going into the last five questions but got a couple of tough ones right to take a lead, so it was pretty exciting and nerve-wracking.

"We had missed a couple of related questions at the area competition," he noted, "and we worked hard on those areas at practice afterward and they did a lot of individual study to get those right. It's nice to see all of their hard work pay off."

All three Science teammates -- Captain Zach Wilkerson, Sam Savage and Conner Stimpert -- were on the title squad last year. However, that will change for next year, Kingma warned.

"I should also point out that all three will be leaving as Zach and Sam are graduating and Connor will be moving, so new people will have to step up," the Science coach said.

Wilkerson's departure will be a particularly big loss.

The 2016 Putnam County Lilly Scholarship winner -- who this week was named a National Merit Scholarship winner as well -- has captured at least one subject title each of his four years (the first two on English and the last two on Science), as well as one Interdisciplinary championship for a personal total of five titles.

Besides Wilkerson, several other GHS individuals have competed and won consecutive state titles as well:

-- Kelly Hansen, two years in a row for both English and Interdisciplinary for four total titles in her sophomore and junior years.

-- Colin Dombrowski, two years in a row for Interdisciplinary as a junior and senior.

-- Ben Gellman, two years in a row for English as a freshman and sophomore.

-- Katie Rose Parsons, two straight titles for Interdisciplinary as a sophomore and senior.

-- Sam Savage, two years in a row for Science as a junior and senior.

-- Connor Stimpert, two years in a row for Science as a freshman and sophomore.

-- Alexandra Weliever, two years in a row for English as a sophomore and junior.

-- Lily Spencer, two years in a row for English as a freshman and sophomore.

Greencastle, which was the only school in the state to send five of its six academic teams to Saturday's state finals at Purdue, also got a third place in the Class 3 division from its Social Studies team, coached for the final time by the retiring Glenn Hile.