Cloverdale's boys' basketball team has high expectations for the 2016-17 season, based upon its strong play last winter and key returning players from the 19-8 sectional squad.

The Clovers have already been ranked in the Class 2A top 10 in some very early pre-season polls, and in order to prepare his team for an even longer tournament run next winter coach Patrick Rady has upgraded his team's schedule to include two new games against out-of-state competition and another in a blockbuster in-state showcase

"Next year the mission will still remain the same, as it always is at Cloverdale," coach Rady said. "We want success in March with the ultimate goal of winning the 2A State Championship at Bankers Life. With the added shootouts, the First Financial Classic, playing in the WIC conference and the Putnam County Tournament; we feel we are going to be as prepared as we can be in March."

The Clovers will be led by Butler-bound senior guard Cooper Neese, the state's leading returning scorer at 29.5 points per game, and junior guard Jalen Moore -- who averaged 18.8 points this year.

The new additions to the schedule include:

* A season-opening game in the Tournament of Champions at Washington, Ill., on Nov. 22 against Champaign Central.

The Maroons feature 6-6 Tim Finke, who will be a junior next year, and is a four-star shooting guard being recruited by major programs from coast to coast.

* A Saturday afternoon game on Dec. 10 against Mount Vernon at Southport in the six-game Forum Credit Union Tip-Off Classic.

Many nationally-ranked elite players will be represented in the event, including Paul Scruggs of Southport, Jaren Jackson of Park Tudor, Kevin Easley of Lawrence North, Kris Wilkes of North Central and Romeo Langford of New Albany.

"This is a special opportunity to showcase our basketball program and honor the rich tradition that coaches and players have helped make before us," Rady said. "It is an exciting time in our program. When you look at the slate of games and you see Cloverdale alongside the other great high school powers, it doesn't get any better for a small school."

* An appearance in the Indiana Basketball Coaches Association "Indiana vs. Kentucky Hall of Fame Challenge Cup" on Jan. 7, 2017. 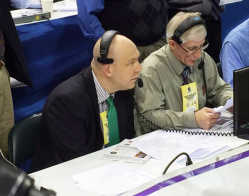 Patrick Rady has improved his team's schedule for next season to better prepare for the 2016-17 tournament run.
Order this photo

Cloverdale's Kentucky opponent is not yet known.

Rady couldn't be more excited about the opportunities these additional games will provide for his players, the team's fans and the Cloverdale community.

"We talk to the players a lot about how privileged they are to play high school basketball in Indiana," he said. "Next year we will get the opportunity to play in two of the top 15 high school gyms in the world. [New Castle and Southport]."

For Neese and Moore, and their families, the trips to New Castle and Southport will hold particularly special meaning.

Neese's father, Jerry, played on the 1983 Hall of Fame Classic team that was the last Cloverdale squad to play in the New Castle Fieldhouse.

"It will be special for Cooper and Jalen to get to play in the famous gyms their fathers did," Rady said.