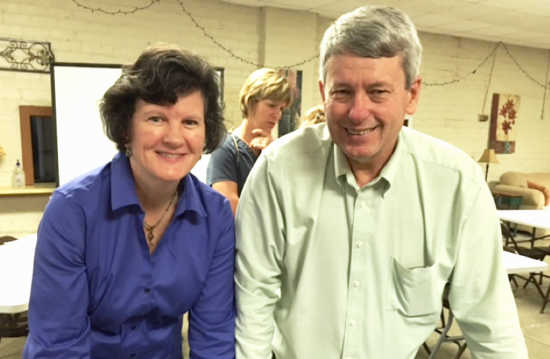 Historian Rose Wernicke and Heritage Preservation Society Board member Larry Tippin look over vintage photos brought by attendees to an update on the proposed listing on the National Register of Historic Places for downtown Roachdale. (Courtesy photo)

Next, HPS is welcoming Tommy Kleckner of Indiana Landmarks to the Kiwanis Room of the Putnam County Public Library on Saturday, May 21 at 10 a.m. He will discuss various architectural styles to be found here in Putnam County, accompanied by slides of specific examples.

Following his presentation, a walking tour of the Eastern Enlargement Historic District will leave from the library at 11 a.m, led by Phil Gick, president of HPS. This walk-and-talk is an opportunity to learn firsthand about the structures that give this area its character.

On Wednesday, May 25 at 6 p.m., in the Local History Room at the PCPL, Wesley Wilson will explore the interconnected history of DePauw University, the City of Greencastle, and Putnam County.

Wilson has been the coordinator of archives and special collections at DePauw for more than three decades.

Wernicke's review took place Wednesday night at the former Optimist Club on Railroad Street in Roachdale, where dozens of attendees gave Wernicke their rapt attention as she began by explaining just what listing on the National Register does and does not mean.

Association with the NR engenders prestige, publicity, protection from government development and eligibility for certain government funding, Wernicke emphasized. In addition, there are certain state and federal tax credits available.

She noted that a common misconception is that inclusion carries restrictions. This is not the case, unless government money is being used for improvements; only then do the standards of the Secretary of the Interior need to be followed.

Her slide display of the various architectural styles featured in Roachdale's historic district was often punctuated by members of the crowd contributing associated details of local lore.

As the audience learned the features defining a Queen Anne, Free Classic, Four-Square or Eastlake building, for example, Wernicke was educated about the notable personages that had lived in those homes and their connection to the town. It was precisely the information she had hoped to gain from such a meeting. Such narratives will add flesh to the bones of the nomination. Although the neighborhood is physically defined by structures, the connection to certain events and people increases historical significance.

Stories that surfaced included a resident who went down with the Titanic and a mysterious bank robbery in the 1930s. Wernicke explained that the NR listing is a way to document the rich history of small towns that otherwise will be forgotten, and that she performs this work as "an inspiration for the future."

The next forum to be scheduled will focus on the historic district nomination for Bainbridge; meetings in Cloverdale and Russellville will follow.

Wernicke's work is funded by an Envision Grant awarded to HPS by the Putnam County Community Foundation.