North Putnam coach Shawn Alspaugh, whose team had lost to Greencastle in the county meet two days earlier, was proud of his team.

"It was awful conditions to play golf in, and they did a good job of fighting through the conditions," he said. "When it's miserable outside and your scores aren't great, it's easy to lose focus and phone the rest of the round in, but they guys kept battling." 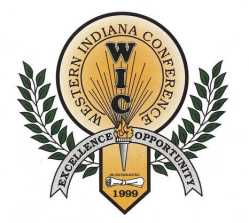 Colton Cuppler of tournament champion Sullivan was the medalist with a 75, while Greencastle's Jake Buis had a 78 to finish second as the only other player to break 80 for the day.

"Of the 59 players in the tournament, 27 had scores of 100 or more," Greencastle coach Steve Paquin noted. "The course was set up with very difficult pin placements and wet conditions along with strong winds."

The Tiger Cubs were at a disadvantage with only four players competing for the four scored spots, as Blaise Hasty was out of the lineup due to illness.

"Every team played with five players and count the four best scores," Paquin said. "The Cubs had to use the scores of all four of their players in the tournament. Jake Buis was able to grind out a very good score to make all conference with a 78, and Jake Bennett also made all-conference with an 86."

North Putnam was paced by Jake Holtze with an 86.

"He hasn't been thrilled with some of his scores lately, so I was glad he was able to come in with a clutch late score for us and earn all-conference," Alspaugh said. "Preston Porter also bounced back from a rough county meet to make all-conference as well.

"Logan Grim played solid golf, and did a good job of avoiding too many big numbers."

Alspaugh noted that Putnam County champion Austin Judy recovered from a poor start to help the Cougars finish in third.

"He had a brutal four-hole stretch that cost him his chance at all-conference," Alspaugh said. "He did a great job of gathering himself over his last four holes."

Alspaugh has been hoping for all four scorers to play well at the same time, and feels the Cougars got closer in the WIC meet.

"It's nice for us to get a pretty good result with still room for us to grow and improve," he said. "We beat some quality teams, and I'm happy for my guys."

Next matches -- Cloverdale plays at Cascade today, while North Putnam will play at South Putnam on Tuesday and Greencastle will host Owen Valley at Windy Hill on Wednesday.