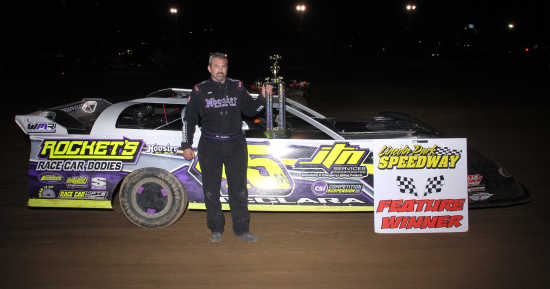 PUTNAMVILLE -- Mother Nature won round one at Lincoln Park Speedway Saturday night with a heavy late afternoon shower that dampened the early evening.

However, Joe Spiker and the LPS track crew worked diligently for a couple of hours to get the track and racing shape.

Ultimately it was the fans that won out on a night highlighted by an extremely fast track presented for the Midwest Sprint Car Series along with modifieds, super stocks and bombers.

Thomas Meseraull was able to battle through some hairy situations in lapped traffic with 10 laps to go and was able to claim the $2,500 winner's share as Kevin Thomas Jr. and C.J. Leary wrapped the top three in sprint cars.

Kenny Carmichael Sr. won a wild UMP Modified main event, only taking the lead for the final two laps to win over Travis Shoulders and Cullen Goodman. Wes McClara picked up his first victory since 2009 when he crossed the line ahead of Josh Boller in the UMP Super Stock A-main. In the bomber feature, Jordan Almanza took the lead on a re-start following a red flag with one lap remaining. He'd hold off Kyle Krupa to the finish line for this third feature win of the season.

Thirty-five MSCS entries were on hand as Thomas, Nathan McMillin, Meseraull and Brent Beauchamp were heat winners. Bret Mellenberndt claimed the B-main to set the field for the 25-lap MSCS A-main.

Brandon Mattox got upside down several laps into the race to bring out the red flag. On the re-start, Meseraull and Thomas ripped off several laps running the high and low lines to great success. The pair opened up a small advantage as Leary gave chase running solo for third. Behind them, Brady Short and Josh Hodges were wheel-to-wheel ahead of Beauchamp. 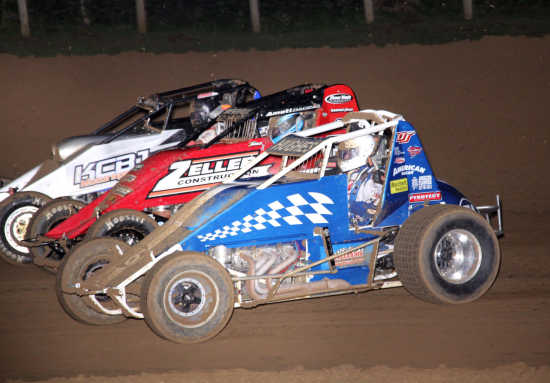 Thomas Meseruall (middle) splits a pair of lapped cars on his way to the victory in the Midwest Sprint Car Series feature at Lincoln Park Speedway Saturday night.

Traffic became a factor 10 laps in as Meseraull was able to open up a bit of a gap having found a clear line through a bunched group at the back of the field. Thomas got hung up briefly before making his pass and giving chase. Meseraull would have his own battle with lapped traffic as he found himself hung up in a large pack. Much to the delight of the crowd, Meseraull found the slightest of gaps, split two lapped cars with inches to spare and made the pass on lap 14.

With 10 laps to go, Meseraull began to open sense the win with Thomas making up some ground with Leary and Hodges in the top-four. A caution reset the field with just two circuits remaining for Meseruall.

When the field took the green flag, he left no doubt after Thomas made an initial surge into turns one and two. Meseraull regained a solid lead, rocketing down the back stretch and finished out the MSCS win. Thomas, Leary, Hodges and Beauchamp made up the top-five.

Carmichael Sr. led only the last few laps in the UMP Modified feature, but they were the most important ones.

His son, Kenny Carmichael Jr., looked to be on pace for his first feature win of the season as he led Cullen Goodman early on as Travis Shoulders and Carmichael Sr. were in front of Dan Lewellen. However, mechanical misfortune struck again for Carmichael Jr. at the midpoint. His motor lost some power heading out of turn three and four as Shoulders took over the point for the next seven laps.

Carmichael Sr. was right on his bumper however, as the pair approached a lapped car. Carmichael went to the top of the track as Shoulders got caught behind the lapped car.

Carmichael scooted into the lead and held the spot down over the final two circuits to claim his second feature victory at LPS this season. Goodman placed third with Lewellen in fourth. Brent Hudson made the A-main after winning the B-main and then raced forward from 16th at the start to place fifth overall.

In the UMP Super Stock class, McClara has battled some mechanical gremlins early with a new car, but they appeared to be tamed Saturday evening as the Coatesville, Ind. native got a long awaited victory.

McClara's win didn't come without its challenges however as Boller showed his nose several different times on the coveted bottom groove. Each time Boller made his presence felt however, McClara was able to shut the door and maintain his lead coming out of turn four. The pair battled lap-after lap Larry Raines moved into third-place ahead of Jonathon Newgent moments before a caution with four laps left.

On the re-start, McClara was able to maintain his advantage and picked up the checkered flag as Boller, Raines, Doug McCullough and Newgent made up the top-five.

The bomber feature was a wild ride all the way to the end as Krupa held down the top spot nearly the entire way. The real battle was shaping up behind the leader as Cavaness and Almanza battled for second ahead of Glenn Ogden and Lenny Krupa III.

By lap 10, Krupa was still out front as Almanza looked for an opening for the second spot. Cavaness continued to run second as the red flag came out for a car rolled over on the front stretch.

After a delay as the incident was cleaned up, the field went green again. Almanza shot to the high side and made it work for him as he got past Cavaness and Krupa for the lead. The Roachdale native held the position over the final corners to pick up his third win of the season. Krupa, Lenny Krupa III Cavaness and Freeland made up the top-five.

The next two weeks will be busy ones for the Putnamville oval as USAC Midget Week invades Thursday for a show along with sprints and super stocks. Saturday will be a regularly-scheduled show leading into the long-awaited return of the World of Outlaws Sprint Cars on June 8.