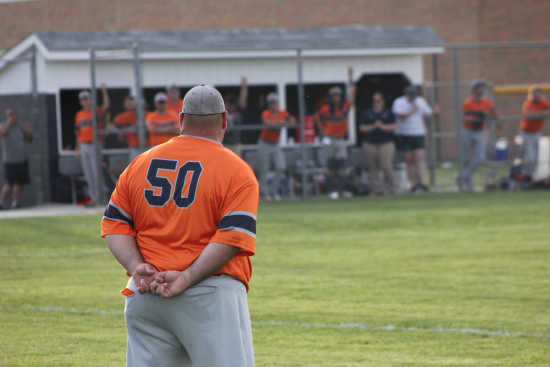 Coach Brian Jeter surveys the field from the first base coaching box.

ROACHDALE -- Coaches of high school team sports are understandably sad whenever their teams are eliminated from state tournament play.

Parents of high school athletes are also understandably sad when the team of one of their children -- especially a senior -- sees the season come to an end.

Brian Jeter had two reasons to be sad on Monday night. 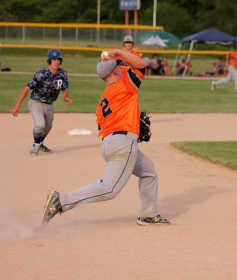 Kyler Jeter makes a strong throw to first base against Rockville on Monday.

The North Putnam baseball coach and father of standout Cougar slugger Kyler Jeter saw his Cougars perform valiantly on Monday against the 26-3 and No. 2-ranked Rockville Rox before falling 2-0 in the championship game.

Coach Jeter remained on the field for more than 20 minutes after the last out was made, undoubtedly replaying every decision and missed opportunity.

"Losing hurts, but when you've been with your son for a long time and you've had the honor of coaching him....... it's even tougher," he said. "This entire senior class has been together since they were 10 years old. It's been special, it just hurts."

The Cougars defeated Monrovia and South Putnam to reach the finals against the Rox, who won the Class A state championship a year ago and were moved up into Class 2A as a result of their success via the IHSAA's "success factor" policy.

If such a policy did not exist, the Cougars are sectional champs.

Instead, they had the tough task of defeating Rox pitching star Dalton Laney, and the Indiana State-bound right-hander was no easy obstacle.

Laney struck out 15 batters in six innings of work, before giving way to Kaleb Huxford in the seventh.

As good as Laney was, he got even better when the Cougars threatened. Five times during the game, North Putnam batters came to the plate with runners on base.

"He beared down," Jeter said. "In the sixth inning, both Kyler and Brayden [White] had 10-pitch at-bats and fought him to a full count. I thought maybe, just maybe, we could put something together. We just couldn't do it."

Over the first three innings, Laney struck out eight Cougars and walked one. 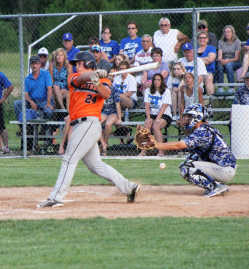 Bobby Scheele fouls one off against Rockville on Monday night.

In the fourth, he struck out the first two batters before walking the next two to give the Cougars their first threat.

Another strikeout ended that threat the first of three consecutive innings in which North Putnam got two runners on base.

In the fifth, Daniel Huffman got an infield single with one out and Cam McPherson walked to bring up the top of the order.

Laney reached back for more velocity and struck out the next hitters to end that threat.

In the sixth, after Jeter and White were both retired on the long at-bats, the Cougars put forth another challenge.

A single by Jack Kendall, followed by a walk to Max Haste, put two runners on base again.

Another strikeout, however, ended that threat.

"They say Laney throws 90 or 91 miles per hour," Jeter said. "We just can into a team that has been in the state finals the last two years and won it last year. There was nothing else we could do.

"It was a helluva ballgame," Jeter added. "Both pitchers pitched well. They had a couple of breaks."

Not to be lost in Laney's dominance was the performance of North Putnam's White, who struck out 10 batters of his own and was only touched for four singles.

The Rox got their first run in the fourth inning as Craig Overpeck walked, went to second on a balk, went to third on a single and scored on a wild pitch.

Rockville got an insurance run in the sixth as Laney reached on an error, advanced on a groundout, went to third on an infield single and scored on a suicide squeeze by Huxford.

"Brayden was phenomenal," Jeter said. "I can't say enough about how well he pitched, and their coach said this was one of the best performances against them over the last two years. He's one of the best this county has ever seen."

White similarly got tougher when things were difficult for him -- stranding Rox runners at third base to end the third, fourth and sixth innings.

Jeter is proud of his team's performance, even injecting some unwarranted self doubt.

"It seemed like we struggled on and off all year," he said. "We kind of peaked at the right time, and we had things to go our way at the end of the season and our bats came alive.

"I was thinking maybe there was something else there for us this year, and we didn't get it done," Jeter added. "Somehow, some way, it's my fault -- it's not theirs."

In other sectional action:

* North Putnam 11, South Putnam 1 -- In Monday's first semifinal game, the Cougars scored in every inning of the contest that was shortened to five innings by the 10-run rule.

Jack Kendall rares back to fire one home against South Putnam on Monday morning.

* Southmont 9, Cloverdale 2 -- In a first-round sectional game on Thursday night, Southmont scored three runs in the second inning and six in the fifth inning to advance to the second round.

The Clovers got one run in the third inning and another in the fifth.

Watts hit a solo home run in the fifth for the other Clover run.

* Tiger Cubs reach finals -- Greencastle lost 13-1 to Indian Creek on Monday night in the championship game in their first game of the sectional.

The Tiger Cubs were scheduled to play Indianapolis Washington at noon on Monday in the second semifinal game of the Danville sectional, but Washington forfeited the game.

Indian Creek, which has lost only one game this season, beat Danville 4-2 in the other semifinal game on Monday.