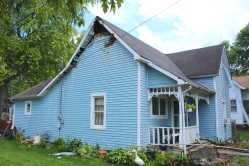 The north side of the Roachdale home, located at 9 N. Main St., saw the bulk of the damage from flames Friday after a man attempting to install a TV antenna came into contact with nearby power lines. Kevin Parker, 56, Roachdale, later passed away from injuries sustained in the incident.

INDIANAPOLIS -- A Roachdale man succumbed to his injuries Tuesday, four days after making contact with a power line in a Friday, July 14 incident.

Parker is the previously unidentified man who was critically injured when the television antenna he was either installing or removing made contact with power lines outside the home at 9 N. Main St., Roachdale.

Listed in critical condition when he left the scene, Parker was taken by ambulance to Hendricks Regional Hospital in Danville before being airlifted to Eskanazi.

The accident also caught some upper portions of the home on fire, prompting a response by seven local emergency agencies as well as Duke Energy.