Last mural for the year 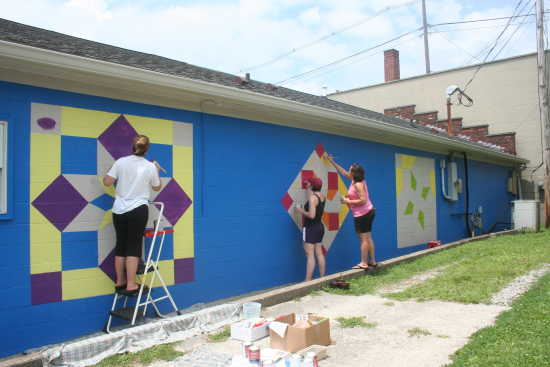 The Greencastle Civic League painted its last mural for the year on the east side of the Hammer and Co. building on the corner of South Vine and East Walnut Streets.

Jeanette and Mark Hammer, under the guidance of lead artist Amy Welch, decided on a mural in the style of traditional barn quilts. "Starlight Barn Quilt," the name of the mural, is nod to the traditions of quilting and agriculture in Putnam County.

This is the second mural project for the GCL this year, having installed "READ, THiNK and CREATE" in the circulation lobby of the Putnam County Public Library in April. Before that, in October 2015, GCL painted "Greencastle Blossoms" on the north side of the Eitel's & Co. Florist building.

"I think you should paint every building in Greencastle," Paula Evans, a resident who stopped to admire the work, said. "It just makes everything better and Greencastle nicer."

Although they may not paint every building, the GCL does plan to paint enough buildings to have a "mural walk" throughout the city. But the league thinks this latest project will have to be their last until next summer.

The purpose of the GCL is the "beautification, clean up, cultural development and general improvement of the life in Greencastle." Other GCL-sponsored activities include an annual clean-up of city roads and the Fair Parade route, floral plantings around the courthouse square and the ParkFest music series.