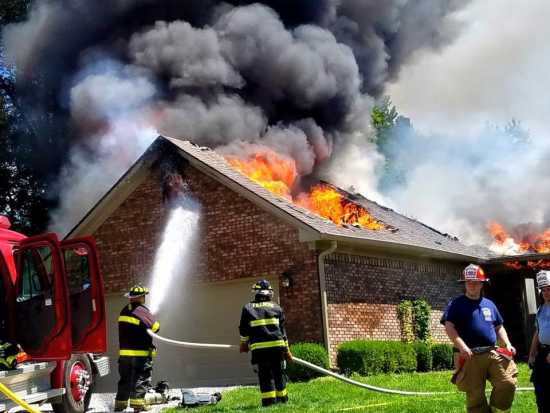 Flames go through the roof of the John and Mary Delaney residence in the Mill Springs section of Heritage Lake. Photo courtesy Floyd Township Fire Dept.

Two firefighters were treated at the scene for minor burn injuries after a section of ceiling reportedly collapsed on them, while a third fireman was taken to the hospital via ambulance with reported chest pains.

Damage to the Mill Springs area home of John and Mary Delaney was estimated at $275,000. It was deemed a total loss, "despite the best efforts of several departments," Floyd Township fire officials said.

No injuries were reported to anyone in the Putnam County residence.

Floyd Township Fire Department would like to thank all assisting agencies for their help on a long and hot fire along with several local residents for their assistance in providing food and water.