Donating their time and even spending some of their own hard-earned money, Putnam County Fraternal Order of Police members were richly rewarded Monday.

They were lavished with smiles and hugs and thank-yous by the time the 18th annual FOP Shop With a Cop event had ended.

Thirty Putnam County youngsters, recommended by the county's four school corporations, were paired with members of the FOP for a back-to-school shopping spree at the Greencastle Walmart store. 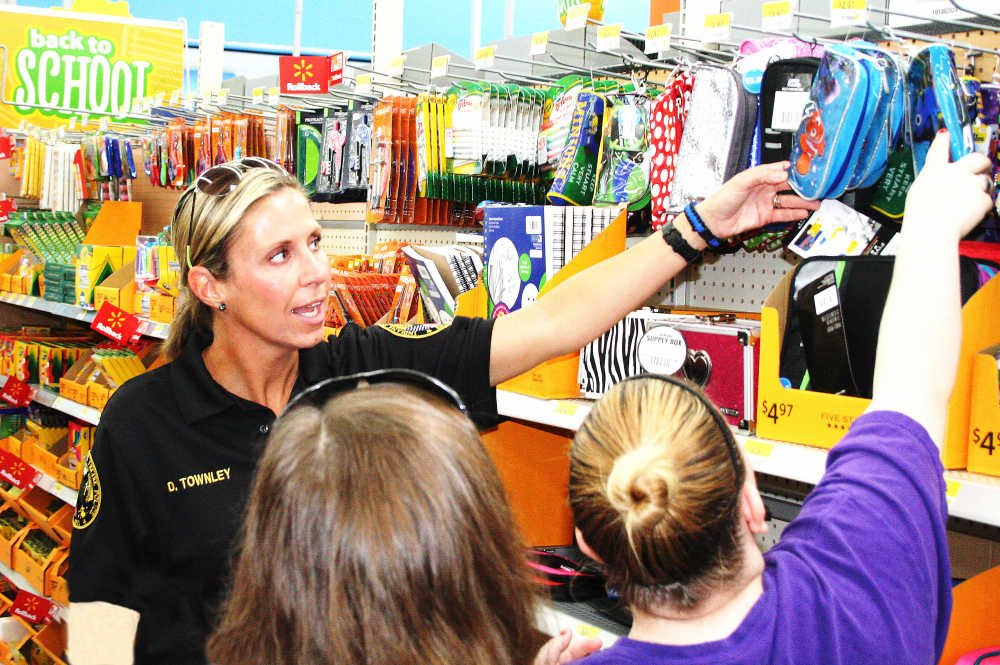 Reaching up to grab a Finding Nemo pencil pouch, Indiana Excise Officer Dawn Townley (above) helps local youngsters get their school supplies during the 18th annual Shop With a Cop program sponsored by the Putnam County Fraternal Order of Police. Meanwhile, Greencastle Officer Nick Eastham checks the price on a backpack student Shakira Blue (left), 12, has selected, as her aunt, Jodi Blue, looks on Monday morning at the Greencastle Walmart store. BannerGraphic/ERIC BERNSEE

Thanks to money raised by FOP fundraisers earlier in the year, a donation from Kroger and the assistance of Walmart, each child had a budget of $150 to spend on shoes, clothes, book bags and other school supplies.

In several cases, however, youngsters' eyes were bigger than their pocketbooks and the police officers dipped into their own pockets to cover the difference themselves.

Officers just couldn't say no when their student-for-the-day wanted to add a pair of dress shoes to the equation or just had to have that special super hero backpack.

"Dad thought every kid needed a pair of shoes for dressing up, and even if he had to pay for them himself, he saw to it that they got a pair of penny loafers.

"And he always made sure to put a penny in the tongue of those penny loafers. He thought that was important."

After all, it is all about positive interaction between kid and cop, suggests Baugh, whose wife Tara is the Shop With a Cop project coordinator. 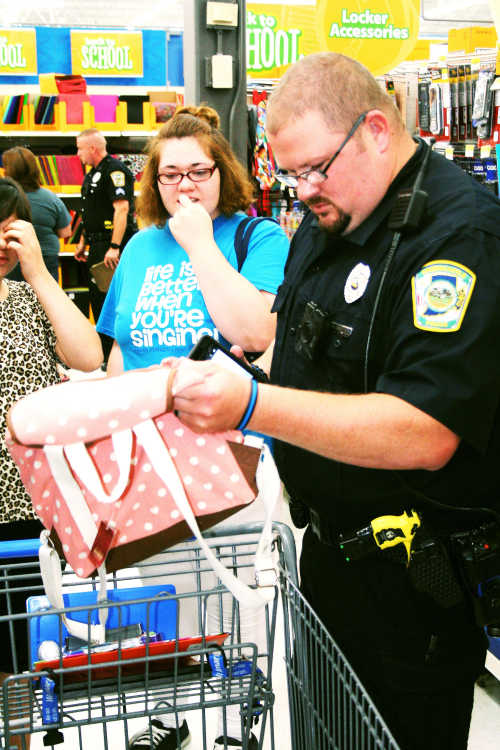 "It's important that things like this are a constant in our community, not a reaction," he added. "It helps our community if we do have some kind of issue that we have to deal with."

Even after 18 years, the interaction never fails to bring a smile to the face of Baugh, a corporal with the Indiana State Excise Police.

"I don't know who started the program but we sure picked up on it," Baugh smiled.

"To me, the best thing is watching the kids and how they change," he said, adding that the youngsters almost always begin the relationship wide-eyed and timid but by the time they've spent an hour or two with the likes of Putnam County Deputy Mike Downing or Cloverdale Officer Luke Brown or Greencastle Sgt. Ed Wilson, the youngsters feel at ease, "poking the officer's duty belt and asking him (or her), 'What's this?'"

Another aspect he loves about the program is that the officers "just really enjoy doing it," Baugh said.

In addition to the GPD group, Cloverdale Police, the Sheriff's Department and Excise officers, the West Lafayette and Danville police departments were also represented.

Nathaniel Lien, a Danville officer who grew up in Greencastle and previously worked for DePauw Police, said he likes the Putnam program better than the Hendricks County version.

With fewer officers and students, the Putnam County event "is much more personal," he said, and gives officers a better chance to interact with the youngsters.

"The recidivism rate among our officers is really good," Baugh said, adding that the program is a great way to "impact kids in a non-stressful situation" in a positive connection or interaction with police officers.

Like his father before him, Jerrod Baugh dislikes the notion some parents put in their child's head when they see a uniformed officer and tell the kid something like "He's going to arrest you if you're not good."

"No, we're not going to arrest kids for not eating their vegetables," Baugh said, suggesting instead to "flip the script" when that misplaced logic arises.

"Dad was more likely to pick the kid up and take him for ice cream," he said.

Funds not spent on the Shop With a Cop effort will be used for the annual Santa Drop in December, Baugh said.

"Christmas is about toys," he said. "This is about back-to-school clothes and supplies."

Not to mention smiles and hugs and thank-yous.