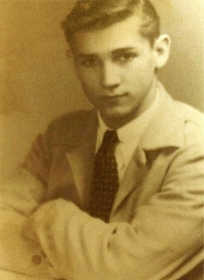 A native of Greencastle, he was the third of five boys born to his parents, Orville Bitzer and Alma Crabtree Bitzer on November 5, 1927.

His wife, Bette Branneman Bitzer and his brothers, Eugene, Billy, Morris and Wendell Bitzer, all preceded him in death.

During his youth he was a student-athlete, excelling in track and field. As a young man, he served briefly in the United States Marine Corps during World War II but spent most of his enlistment boxing against other Marines, without ever being deployed to fight the enemy.

He worked at General Motors in Indianapolis for 31 years while raising a family in Putnam County. He and his wife spent their retirement years in Florida, enjoying the warmth in comfort.

As a young boy, one of Bob's sons once asked him what he wanted to grow up to be when he was merely a boy of the same age. A child of the Great Depression, he said he only hoped to grow up to marry a nice woman and have a family. At the time, his son was pretty disappointed by his seemingly ambitionless answer.

"But all these years later, I have finally recognized his pragmatic wisdom and only hope to achieve the same. Rest in peace, Bitzer."