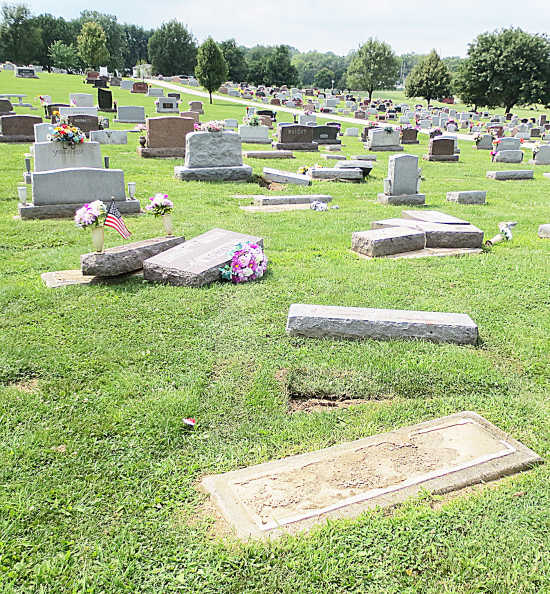 Seven gravestones at Forest Hill Cemetery lie overturned and damaged after being struck by a car Monday afternoon. (Courtesy of City of Greencastle)

Several gravestones at Forest Hill Cemetery were damaged when they were struck by a car in a Monday afternoon mishap.

Around 2:30 p.m., Lena V. Graves, 89, Greencastle, was southbound on a driveway in the northeast part of the cemetery.

As she attempted to round a tight corner, Graves' 2008 Saturn Vue hit a large boulder on the corner of the intersection. The boulder, which cemetery superintendent Ernie Phillips estimated to weigh several hundred pounds, was overturned by the impact.

After striking the boulder, the car veered to the right and into the grass, where it ran over several tombstones before coming to rest on top of two of them.

Phillips said he was in his office doing paperwork when he received a call from a funeral director conducting a nearby graveside service. He said people from the service "heard the engine rev and then bam, bam, bam."

Several people from the service, who had not been so close as to be in danger, were at the scene checking on Graves' well being. She was uninjured in the crash.

Putnam County Sheriff's Department Capt. Tom Helmer estimated that between $5,000 and $10,000 damage was done between stones and the car. The vehicle was towed.

"It was pretty different for the cemetery," Phillips said, adding that he's seen nothing quite like it in the 27 years he has worked at Forest Hill.

While some stones could simply be set back upright, Phillips said several will need to be repaired or replaced altogether.

The four most heavily damaged stones were placed between 1967 and 1969.