Mystery of those pesky corn flies? Experts don't even know why they're swarming

If you have been outdoors at all the past couple of weeks, you know three things ..

It's hot, extremely hot. It's humid, horribly humid. And pesky flying bugs seem to be swarming around us whenever we go. 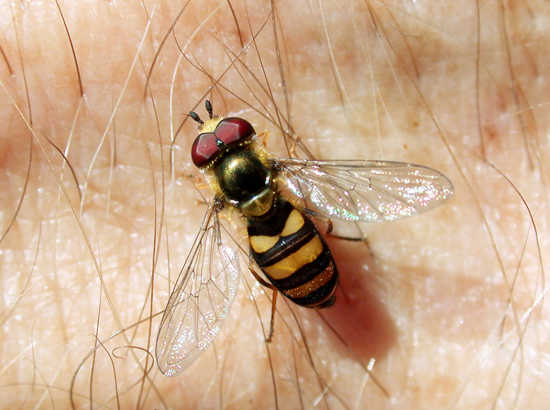 Corn flies or hover flies, they're here and will be here a while, a Purdue Univerity entomologist reports. Courtesy photo/PURDUE UNIVERSITY

During First Friday on the square in Greencastle the other night, you couldn't keep them from dive-bombing your Myers' Market loaded nachos. Turn the wrong way and you just might inhale one or see one get stuck by the wings in your gooey cheese.

"They just swarm all around our windows," a McDonald's worker, exasperated at the sight, said Tuesday.

At the fairgrounds car show Saturday, spectators spent as much time swatting bugs out of their personal space as they did ooh-ing and aah-ing over the super sweet cars and trucks on display.

Even driving a convertible is no help. Once those pests land on your interior or swarm the inside of your windshield, they're along for the ride, whether you're going to the Dairy Barn or Dairy Castle.

"They're corn flies," offered classic car exhibitor Brian Nees of Cloverdale Saturday as the bugs swarmed the fairgrounds, particularly near the bushes separating it from Windy Hill Country Club.

"You should get used to those little guys," he told the Banner Graphic. "They will be around for a while."

The recent spike in numbers over the last couple of seasons is a bit of a mystery, but nothing to be concerned about, the entomologist said.

"As for why they are here now, I don't know that answer," Krupke admitted. "We see insect outbreaks periodically and usually cannot come up with the reason why at the time. Blame the weather, I guess."

"They need to be wet," the Purdue expert said. "And they need salt, which is pretty scarce for insects."

In a recent newsletter, Krupke pointed out that the department has received "many out-of-focus pictures and videos of multitudes of looping worms crawling over spray equipment in cornfields."

Many questions followed: "What are these creepy things?" "Were they eating the corn?" "Should we kill them?" "Are they edible?"

The "worms" are actually maggots -- fly larvae, Krupke said, noting that the only maggots found in cornfields this time of the year are known as syrphid fly larvae.

So those hover flies or corn flies buzzing around your sweaty forehead are the adult form of those maggots.

Those common this year, Krupke explained, get their protein not from aphids, but from corn pollen. They tend to feed in areas where pollen collects.

"They are not pests," the entomologist insists, "and are really only feeding on 'surplus' pollen that does not land on silks and pollinate corn.

"Pollination is now largely complete in Indiana corn," he added, "and each corn plant produces many thousands of pollen grains more than it needs, so these maggots are taking advantage of an underutilized protein source."

"This helps protect them from predators that confuse them with more hostile and hazardous insects," he elaborated. "The species we are talking about here, Toxomerus, looks like a tiny yellow jacket wasp.

"They cannot sting and are harmless," Krupke continued. "Sweat bees, on the other hand, are actually bees and have stingers. They are smaller and are typically dark or metallic in color."

Both hover flies and sweat bees can be a minor nuisance, he said.

"They are attracted to us by moisture and salts they get by lapping up our sweat."

Sweat bees will sting if we accidentally squish/swat them against our skin while they are feeding. However, they are "sometimes cruel and will sting even when they are not bothered at all," the bug expert added.

"To sum up," Krupke said, "the maggots in corn are not a concern. They are not really a pest, nor are they beneficial.

"Like the vast majority of insects, they are neutral for us humans -- they're just out doing their thing."