'Exciting time' to be part of political process, Defenders told

On a day when 50 Republican national security experts made a point to call out their party's own presidential candidate as "too erratic" for the White House, local representatives voiced at least mild support for the Donald Trump-Mike Pence GOP ticket in appearances Monday night in Greencastle. 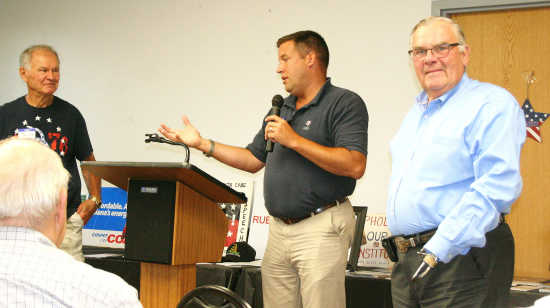 "What an exciting time it is for the political process," Rep. Baird, who is seeking he is fourth term in the Statehouse, said. "I've never seen anything like what's been going on at this time."

He told the local Tea Party group that it is important for its members to "stick to your mission and help other candidates succeed."

"I think people are frustrated and ready to express themselves," Baird said of what to expect when voters go to the polls Nov. 8, assuring that he has "never changed his values in how I represent you in the Statehouse."

Baird praised the Defenders of Liberty and groups like it for staying engaged in the political process, noting that the Defenders are part of the reason "Indiana has become a major player" in this election.

"It's not just by chance," he assured, pointing to Defenders' goals of limited government and a better-informed electorate.

He also credited the group with helping Hoosiers lawmakers focus on ensuring a balanced budget for the state.

"And out of that, we have a vice president (candidate) in Mike Pence that's come right out of the state of Indiana," added Rep. Baird, whose Democrat opponent Kim Fidler of Greencastle was also present but did not speak.

The team of "Donald Trump and Gov. Pence makes a nice balance in my opinion," Baird continued, calling Pence "a very conservative man who should be a nice influence" on presidential hopeful Trump.

Meanwhile, Crane offered the viewpoint that "it is exciting that Indiana is in play, while on the other hand, there is some real cause for concern."

Crane, who ousted incumbent District 24 Sen. Pete Miller in the Republican primary, now only has Liberatarian candidate Keith Rogers standing in his way of representing portions of Putnam and Hendricks counties in the State Senate during 2017-18.

Calling himself an "idealistic pragmatist," Crane recalled that when asked during the spring Greencastle League of Women Voters debate at DePauw University which of the then-17 Republican presidential hopefuls he supported, Crane responded that Ted Cruz was his candidate of choice.

Of course, Cruz and 15 others are no longer in the race and Trump has emerged as the last man standing.

"So unless you're a Donald Trump fan, your horse has been taken out of the race," Crane told a Defenders of Liberty crowd of about 30.

Apparently at least lukewarm on the possibility of a Trump presidency, the alternative is definitely not Crane's cup of tea.

"The alternative -- a Hillary Clinton presidency -- clarifies the path pretty well," Crane said, suggesting that the next president will definitely have one U.S. Supreme Court justice appointment (due to the death of Antonin Scalia) and could have as many as four to make over the next four years because of the age and health of the other eight justices.

That's a lifetime appointment for nearly half of the Supreme Court that could rest in the hands of the next president, Crane pointed out.

Thus, he stressed that it's important that Hoosiers and fellow Republicans "keep the big picture in mind" when they go to vote.

Saying he knew he was "preaching to the choir" Monday night, Crane nonetheless stressed that clarifying the message is vital.

While not always being able to explain "why we're Republicans" or "why we're on the right," it is important to know, Crane said, that his party "believes in an enduring moral order" and that there is a right and a wrong.

"We believe in conservative values because they work in our personal lives," Crane stressed to nodding heads all around.

"If you're against Welfare," he observed, "you're (characterized as) a heartless capitalist.

"Is it really the most compassionate thing to give a handout, or do we need to give a hand up?" he asked to verbal audience support.

"Sometimes the worst thing you can do is to allow people to be caught in a quagmire of dependency," Crane added, alluding to the Welfare issue.

The State Senate hopeful stressed that "some kind of standard of right and wrong" needs to be a hallmark of both government and society.

"That's as old as creation itself," Crane continued, "but we're losing that because it's not hip and trendy."

The need to be able to engage in civil dialogue is also vital to America's future, the GOP candidate said.

"We cannot even debate civilly," he added, taking social media interaction to task for oftentimes bringing out some of the worst in people when they try to get in the last word on Facebook or in a comment section.

"Finally," Crane said, "we need to do all of this with the courage of conviction."

If Americans cower from that because of what someone else may think, he said, "ultimately we all descend into a chaos or are worse off for it."

Again preaching the Republican gospel to the Defenders of Liberty crowd, Crane offered, "I think our conservative philosophy matches better with reality and I think that it's better for people."

Like Baird before him, Crane noted that the election is now less than three months away.

"We know what our marching orders are," he told the group.

"As Ronald Reagan said, if we lose freedom here, there's no other place on Earth that offers the freedom we do."