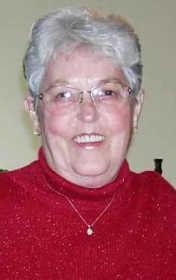 She was married to Donald Lee Williamson on June 6, 1987. He preceded her in death.

She was also preceded by a brother, William Hawk.