A bronze statue of Abraham Lincoln that was a model for the finished marble statue inside the Lincoln Memorial -- one of only nine copies in existence -- has been rediscovered at DePauw University. 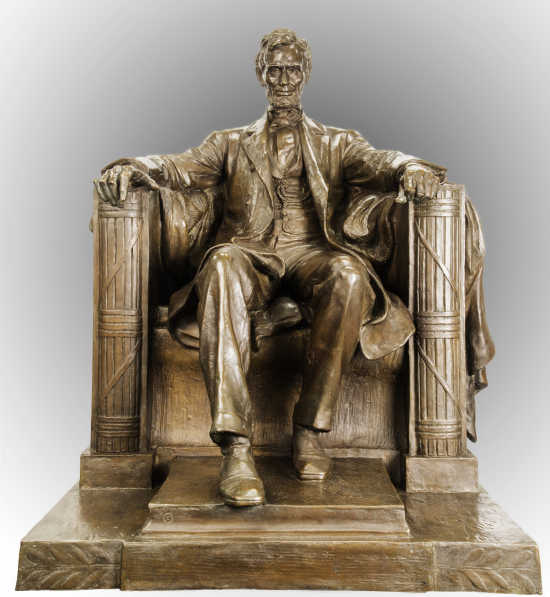 G. Bromley Oxnam, DePauw's 16th president, purchased the Lincoln maquette in 1931 at Grand Central Art Galleries in New York City and presented it to the university as a gift for students and faculty.

For a time, the bronze maquette of the seated Lincoln was displayed in DePauw's library, where students began a tradition of leaving pennies at the base of the statue for good luck.

Over the years, history of the statue faded, and it was placed in storage during renovations. As a result, it was deemed "missing" by the museum industry for decades. Other museums in possession of identical maquettes include the Art Institute of Chicago, Harvard Art Museums and Massachusetts Historical Society.

After it was found during more recent renovations on campus, the university arranged for professional conservation treatment to restore the Lincoln statue, and it will once again be displayed on campus, according to Craig R. Hadley, DePauw director and curator of exhibitions and university collections.

Shortly after DePauw's website carried an announcement of a public lecture last fall about the statue's history and art historical significance, a Lincoln researcher serendipitously found the Internet reference. He was thrilled to have finally located the "missing" maquette, and he will include DePauw's statue in a forthcoming publication.

"President Oxnam was most likely attracted to the statue at the time because it bore a direct connection to one of the nation's most prominent public monuments devoted to our most cherished collective values," Hadley said.

Sculpted by famed American artist Daniel Chester French (1850-1931), the maquette is one of several connections DePauw has to Lincoln, and it carries art historical significance.