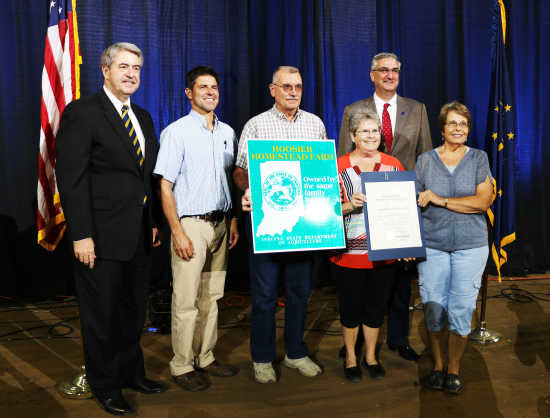 Among the properties honored during a ceremony at the Indiana State Fair was the Vaughn Family Farm, located in Putnam County. It has been in operation since 1856 and received the Sesquicentennial Award.

Joining the Vaughn farm as honorees for 2016 were:

-- The Leatherman Family Farm, located in Parke County, received the Sesquicentennial Award. It has been in operation since 1849.

-- The George Goss Family Farm, located in Morgan County, received the Centennial Award. It has been in operation since 1870.

"Indiana's agriculture industry is a critical part of our economy," Baird said, "bringing in more than $30 billion, amounting to approximately 245,000 Hoosier jobs.

"Reaching the milestone of owning a farm for more than a century deserves recognition for their contributions to our community," the three-term state legislator added.

The Hoosier Homestead Award Program recognizes Indiana farms that have been owned and maintained by the same family for 100 years or more.

Two awards ceremonies are staged each year, spring and summer, to commemorate the achievements of farmers across the state.