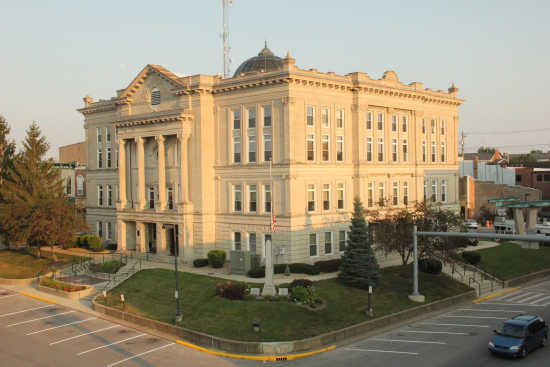 The 111-year-old Putnam County Courthouse is set to get some much-needed repairs to the limestone exterior.

Provided the Putnam County Council approves funding, the county commissioners on Monday morning approved a $115,000 agreement with Atlas Building Services for exterior building improvements that includes tuckpointing, sealing seams and cracks and generally improving appearance and structure of the limestone.

Brian Gottschalk of Atlas originally presented a plan of smaller scope to the commissioners last October. However, when the commissioners looked into the matter further, they received a much more extensive quote from Western in the neighborhood a quarter million dollars.

At that point, the county went back to Atlas for an apples-to-apples comparison.

The estimate still came in well under the other quote, leaving the commissioners with what turned out to be a unanimous decision.

"I think it's about time we got on this," Commissioner Don Walton said. "We've been talking about it for quite a while."

The matter now goes before the county council, which gave tentative approval to the expenditure Tuesday evening meeting, with the money coming from the cumulative courthouse fund.. The matter will be back before the council for final approval in September, after the additional appropriation has been advertised.

County officials hope to get the work scheduled relatively soon. Gottschalk said the current period is a bit of a down time for the company, but work is likely to pick up again around mid-September.

The job should take around five weeks to complete.

Head custodian Brian Smith, who first brought the exterior needs to the commissioners' attention, also spoke on Monday about replacing the flourescent lighting in the courthouse with high-efficiency LED lighting.

The matter came before the commissioners two weeks ago with a $33,000 proposal presented by Bee Fit Inc.

Smith advised the commissioners that he believes the work can be done in house for a cost of $13,525 for materials. There would be no added labor costs, as the custodial staff will perform the work during regular hours.

This proposal comes on the heels of a multi-year project in which the custodial crew replaced the heating and air conditioning system for the entire courthouse.

In an unrelated discussion Monday morning, County Attorney Jim Ensley praised Smith and the rest of his crew for the work, noting that the system has held up nicely during the recent heat wave.

One selling point of the Bee Fit proposal -- a rebate from Duke Energy for switching to high-efficiency lighting -- remains in play even if county employees perform the installation.

Following installation and an inspection by Duke, the county should be reimbursed 50 percent of the cost of materials.

Smith estimated that the lights will use 60-65 percent less energy than their current counterparts.

The commissioners approved the in-house plan, with the funds to come from the courthouse maintenance fund.

Even with courthouse improvements coming, one building that remains problematic for the county is the old Courthouse Annex (Jones School).

Clerk Heather Gilbert was granted permission to hire a temporary part-time employee to go through her records housed at the old annex.

With the roof on the building continuing to deteriorate in the five years since it was last utlized for anything besides storage, most records have now been consolidated into the school's gym.

The clerk's office records, however, are not housed in a cage like those of other offices, instead spread around the gym.

Gilbert was granted permission to hire Ignatius Wilson to review and organize the records, figuring out what has been scanned as well as what can be destroyed.

Wilson, who enjoys genealogy and preservation of history, has been volunteering in the back room of the clerk's office to organize records there.

Ensley later brought the discussion of the meeting back to the annex, urging the commissioners to work with the county council on coming up with a plan for what to do about the annex.

"We really need to start talking about building an annex," Ensley said.

At this point, the exact nature of any plan has not taken shape, but a feasibility study performed a decade ago indicated that a new building at the current site at Liberty and Madison streets is likely most cost effective.

Now is the time to start the discussions, Ensley said, because Economic Development Income Tax funds will be freed up after the final jail bond payment is made in 2018.

Crews are spending the week pouring foundations on Bridge 248, a federal aid project on County Road 650 East in Jackson Township.

At Crowe's Bridge on 100 East in Greencastle Township, the deck is being poured this week.

The in-house replacement of Bridge 8 on County Road 800 North west of U.S. 231 is entering a new phase, as crews are finishing up the concrete before starting deck work.

At Bridge 76 on County Road 375 East in Floyd Township, crews closed the bridge on Monday. The old bridge will be removed this week, with concrete work starting thereafter.

Bridge 42 on County 25 West in Franklin Township will be closed on or after Wednesday.

The commissioners asked Ricketts to pursue an inquiry from the Area 30 construction equipment program about acquiring one of the highway's old trucks.

* Although the exact qualifications are not yet set, the commissioners will be looking for a new appointment to the Putnam County Plan Commission. More details will be shared when they are available about geographical or political requirements for the new appointee.