Judgment day came Monday afternoon for a 26-year-old Hendricks County man whose eloquent apology and admission were outdone perhaps only by his criminal rap sheet.

Consider his transgressions: Possession of 117 grams of methamphetamine. A 100-mph police chase through Hendricks and Putnam counties. A Putnam County Jail fracas in which he reportedly battered four female jail officers, hurling a food tray that struck one of them in the thigh. 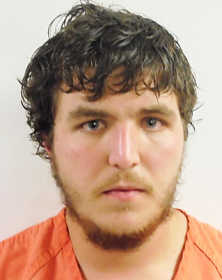 All that led to Nicholas J. McAlister of Avon being in front of Judge Denny Bridges for sentencing Monday in Putnam Superior Court.

In exchange for those guilty pleas, one count of resisting law enforcement and three other battery counts (all Level 6 felonies) were dismissed.

While the agreement left McAlister's sentencing fate open to argument, the Putnam County Prosecutor's Office agreed to cap his sentence at six years with the two causes to run concurrently.

"He's definitely a danger to the public and police officers," Bookwalter added.

McAlister, represented by Indianapolis attorney John L. Tompkins, had earlier apologized for his various missteps, saying he was "very thankful no one was hurt" in the high-speed chase that preceded his arrest last Oct. 27.

The defendant also apologized to the female jailers he scuffled with during a Dec. 22 incident, an event that prompted tighter-than-normal courthouse security when McAlister next appeared in court confined by extra shackles and belly chains and relegated to the back row of the courtroom where a jailer, Sheriff Scott Stockton and Chief Deputy Phil Parker all stood nearby.

"This is the first time since 2012 that I can honestly say I am clean of drugs and alcohol," McAlister told the court Monday, noting that his addictions have caused him to lose "jobs, opportunities and now, my freedom."

He asked to be put into a program where he could prove he can be a productive member of society.

"Not withstanding your statement of elocution," Judge Bridges said in pronouncing sentence, "I agree with Mr. Bookwalter. Something doesn't add up."

The judge noted that McAlister recently spent his 26th birthday in the Putnam County Jail as part of a 295-day stretch while awaiting the outcome of the charges against him.

"You keep it up," Bridges suggested, "and you're going to turn 66 in jail.

"What part of criminal justice don't you understand? It doesn't seem to faze you at all."

Judge Bridges then ordered McAlister to serve six years of executed time with 10 years on probation.

After five years of that probation, the judge is willing to allow McAlister to serve the final five years on informal probation if he can refrain from any new charges or violations.

"We're going to find out if you're telling the truth," the judge told McAlister, "or if you're trying to pull the wool over my eyes like everyone else in this courtroom."

The 10 years of probation, Bridges said, should help assure McAlister changes his ways since he "will always have 10 more years in the DOC hanging over your head."

In addition to the Putnam cases, McAlister has two open cases in Hamilton County, Ohio, including a handgun charge, open container violation, possession of paraphernalia and driving on the wrong side of the road.

He also still faces Hendricks County charges relative to the high-speed chase during which he fled from law enforcement after being clocked at 102 mph in the wrong lane of U.S. 40.

The pursuit reportedly reached 115 mph before McAlister was finally stopped on County Road 250 East, north of County Road 700 South in southeastern Putnam County. Officers had to forcibly remove him from the Ford Fusion he was driving.

When arrested after the chase, McAlister had more than $1,300 in cash in his wallet and harbored two bags of a crystal-like substance. Later determined to be methamphetamine, it totaled 117 grams (or 4.1 ounces).

Prosecutor Bookwalter asked McAlister Monday why he was carrying so much meth.

"We were going out of state to North Carolina (to work)," he responded. "I wanted to buy some to take with me."

After being stopped, McAlister reportedly continued to defy officers' commands as they attempted to transport him to the jail, letting his body go limp to the point officers had to carry him to a cruiser for transport. Once at PCJ, he went limp again, forcing officers to carry him into the book-in area.

Even in the aftermath of the Dec. 22 jail fracas, McAlister continued to demonstrate belligerent behavior.

It was requested that McAlister write out a voluntary statement of what transpired at the jail since he would not answer Capt. Tom Helmer. That didn't work out so well either.

Leaving a statement form and pen with the inmate, Helmer returned some 45 minutes later, only to find no statement from the combative suspect.

"McAlister apparently flushed the statement form and the pen down the jail toilet," Helmer's report noted.