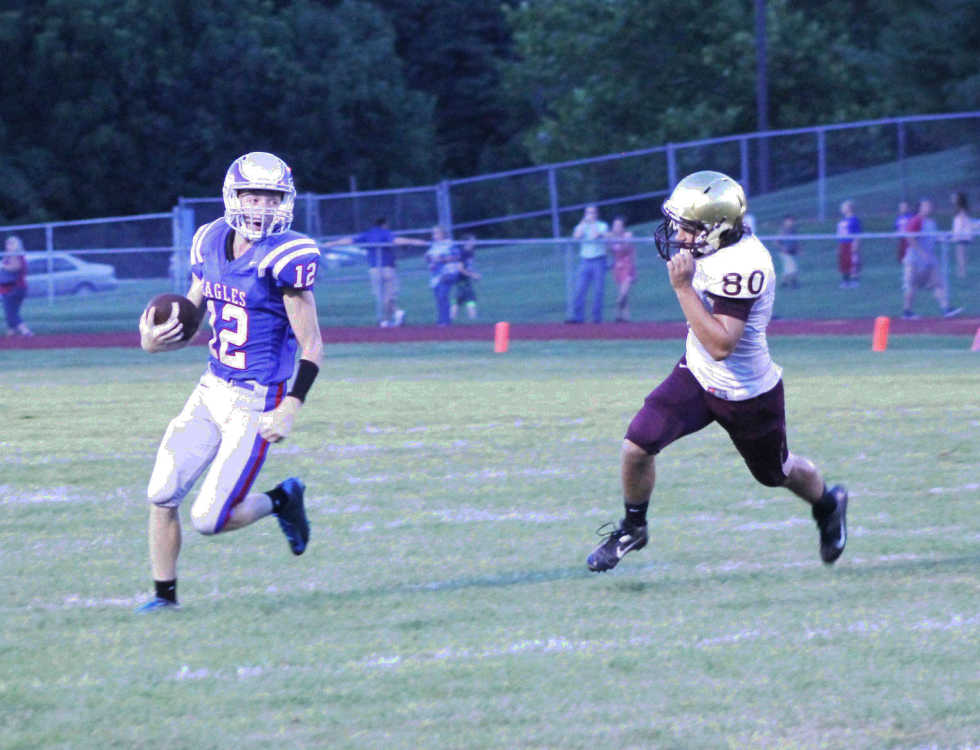 South Putnam's Christian Zeffel looks to get away from an Indianapolis Lutheran defender during Friday's scrimmage.

South Putnam's Nathan Aker lost several outstanding players to graduation from last year's 8-4 team that placed third in the West Division of the Western Indiana Conference, but also returns several key performers with others looking to break through as replacements.

Putnam County "Offensive Player of the Year" Joe Masters has taken his skills and leadership to defending NAIA national champion Marian, and is the kind of player who is not replaced by one single person.

"It's been going really well so far," Aker said. "We have a lot of young guys who saw action last year, and a good mix of seniors. It's a little bit of a learning curve for some of them, but they're starting to jell.

"I like the attitude developing with this group," he added.

The offensive backfield is in good hands with another mixture of youth and experience.

"He's an all-state player and a great player and leader," Aker said. "This is one last ride for our senior class, and he's helping get them ready to go. He's like another coach on the field."

Joining Shaffer in the backfield is sophomore Dalton Scott (6-2, 170), who started at fullback last year.

Directing the offense will be athletic sophomore Allen Plunkett, who spelled graduated starter Grady McHugh at times a year ago.

"Allen has jumped into that role and hit the ground running," Aker said. "He's all in, and I really like what I've seen."

Aker plans to continue to utilize multiple back offensive sets, and despite the talent level of his personnel he knows they won't succeed without one huge contribution up front.

"Any time you are returning your starting running backs that's a good place to start," he said. "But it all starts up front. The right side of our offensive line returns, and we'll be lining up a lot behind them."

Two senior captains (along with Shaffer) will help plow the road, as seniors Josh Bills (6-4, 400 -- according to the team roster) and Kody Britton (5-10, 200) provide nearly a third of a ton of power up front.

Defensively, Shaffer will man the inside linebacker position joined by Scott on the outside, who started at safety last year. Sophomores Colton Grundlock, Connor Cain and Aidan LaBlanc will add depth at that position.

"Some are big and some are fast," Aker said. "Our returning starters are not biggest guys in the world but play like it."

Reducing the number of two-way players is a universal goal for small school football programs.

"We are trying to build depth as a program," Aker said. "We have a nice core there, and guys like Fields and Bills have done a great job of leading by example in the weight room."

Aker enjoys the competitive nature of the "new" WIC, in its second year of having 12 teams, even though his team had a few bumps in the road last year.

"We have no complaints about the new conference," he said. "It's good for us, and it's a grinder. Being a 1A school playing in a 3A-4A conference, is tough but we have no problem with that. We went through some hard lessons last year with losses to Sullivan [42-34] and Northview [59-0], but they got us prepared for the tournament. That's what SP football is about -- what you can do in the tournament."

Aker was pleased with his team's play in Friday's scrimmage against powerful Indianapolis Lutheran.

"I liked how our guys came out and competed in the scrimmage," he said. "We stepped up to the challenge and were able to do some great things while attempting to stay vanilla in terms of scheme."

"For the most part, we liked what we saw from our pursuit and ability to tackle the ball carrier," he said. "On offense, we had a few new faces in very important places who rose to the occasion. Our offensive line is continuing to develop and rise to the expectation that they have put upon themselves. We made definite progress there."

Aker was also pleased with Plunkett's play behind center.

"He had a quality start for us at quarterback, showed some leadership and playmaking characteristics there which will pay dividends for our offense this fall," Aker said.

Like all coaches, Aker and his staff have reviewed the film to fix any problems that remain in preparation for Friday's opener with Cloverdale.

"There are things that, some weeks, you might be able to get away with but in order to compete at a high level, you have to eliminate those mistakes or improve from a technique standpoint," he said. "Our players have set high expectations for themselves and this tape allows us to see exactly what it will take to be able to compete in the upper level of 1A. That, in addition to our WIC schedule, will really go a long way in helping us prepare at a high level throughout the season as we felt it did last year leading into the sectional."