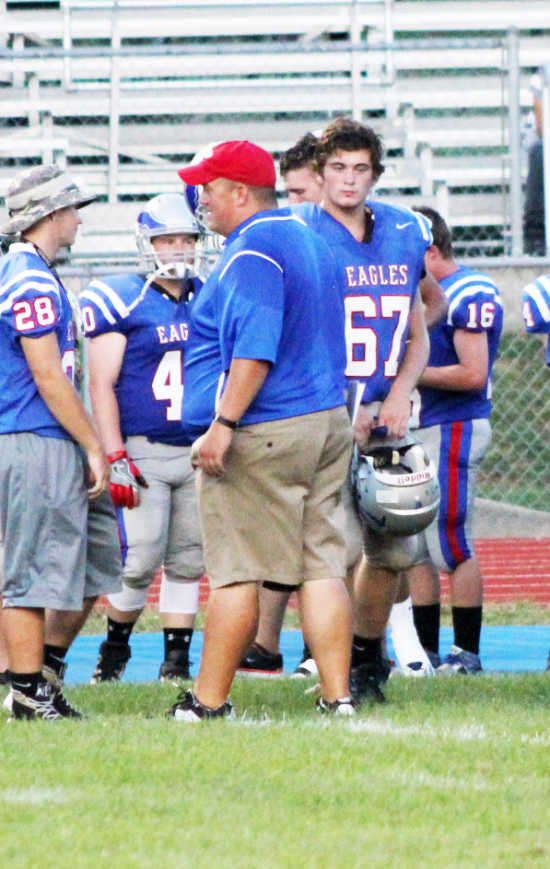 South Putnam Nathan Aker does not think the change in the high school football play clock will have a huge effect on the game.

Working with the Indiana Football Coaches' Association, the Indiana High School Athletic Association has made two significant rules changes for the 2016 season.

One of these changes will never be seen by fans and spectators at the Friday night games, while the other will make some sort of changes to the game -- but no one is quite sure exactly what those changes will be.

The "hidden" change comes in response to growing concerns from everyone involved with football on the dangers of concussions and well-publicized brain injuries suffered by players at all levels.

This year, teams are limited to two days of contact practice once the season starts, whereas previously there was no limit on the amount of hitting that could take place.

The four Putnam County coaches were far ahead of the curve in anticipation of that rule change, and had already made this adjustment to their schedules.

"It's a good thing, and I had already done that last year," Cloverdale coach Tony Meyer said. "The coaches who have big rosters want to hit as much as they can. If you only have 32-33 on the roster, they're only hitting once a week. I am a fan of one day a week. It keeps guys safe."

Meyer realizes that hitting is, and always will be, a vital part of the nature of the game.

"Kids need to hit to get their body acclimated," he said. "I don't think limiting hitting early [in the pre-season] is good; they need to get their bodies used to the contact."

Meyer said it's a normal schedule for teams to have a junior varsity game on Monday night, contact practices on Tuesday and Wednesday, a walk-through without pads on Thursday, game night on Friday and weights and film review on Saturday mornings.

He reports no problems with concussions so far.

"We're rock solid," Meyer said. "We've been hitting, and have had no problems yet."

"We don't always go full pads on Wednesdays," he said. "It's based on what we have to work with. These kids want to compete and you want to lessen the injury possibility.

"Those rules are probably set for the bigger schools who have a lot more kids," Barrett said. "It does not phase us."

South Putnam coach Nathan Aker is pleased with the state coaches association for its role in instituting this change.

"They are doing a good job trying to stay out in front," he said. "A lot of stuff they're coming down with, we've been doing here for years.

"The summer rules and guidelines have been good," Aker said. "Teams can do as much as they need to do without overdoing it. Being aware of kids has helped to keep kids safe."

Greencastle's Mike Meyer has also been utilizing a practice schedule with reduced hitting, and shares the opinions of his colleagues on the matter.

The most visible change will come with the play clock, which dictates how much time a team has to make substitutions, call a play and snap the ball.

In the past, the clock was set for a 25-second countdown.

This year, there will be two different lengths of time used. On the first play of a new possession, the amount of time will be 25 seconds; on all subsequent plays, the length of time available is 40 seconds.

Dan McGrath, known as the football rules guru for the Wabash Valley Officials Association, admits he wasn't sure the effect of the rule change before officiating a scrimmage on Friday. Based upon that experience, though, he likes the change.

"After doing a scrimmage, it makes the game more consistent," he said. "Fans will have to take a look to see if the clock is set for 25 or 40 seconds."

Surprisingly, McGrath says the change will not have the biggest effect on the players, officials or coaches.

"This definitely will put a lot more pressure on the person in the press box running the clock," he said. "The clock operators will have to be much better. Day is over when someone runs both game clock and the play clock. There used to be some places where the same person did both things."

McGrath said there had been inconsistency on the administration of the play clock in the past, and extensive clinics have been held for officials, athletic directors and clock operators to make sure the game is conducted correctly.

He thinks the result of the change will be more plays in a game, but coaches can also use the extended time length to reduce the number of plays similar to a slowdown offense in basketball.

The people working the "chain gang" will also have to be on their toes.

McGrath said the two orange markers used to indicate the starting line of scrimmage and the spot needed to achieve a first down may not always be set down on time in the case of a team using a no-huddle, hurry-up offense.

"Everybody can expect the same amount of time between the end of one play and the start of the next one," he said. "Coaches can use this as a strategy to milk the clock, but if you can't make first downs then it doesn't matter any way."

Cloverdale's Meyer likes the change, and is formulating game strategy to take advantage of the extended time.

"What's going to help us this year is the 40-second clock," he said. "If you sustain a drive, utilize it correctly and stay in bounds it can reduce the length of the game."

Meyer's team allowed an average of more than 48 points per game last year, and thinks the change can help.

"Last year we had so many turnovers and people playing out of position," he said. "This year we want to be close or leading going into the fourth quarter, and try to use the clock to our advantage."

Barrett is mixed on the potential effect of the play clock change on the game.

"It will be interesting to see how that plays out," he said. "I understand we are one of three states who are doing this, and they are testing it to see how it goes.

Aker and Mike Meyer both downplayed the effect of the change.

"We will do fine adjusting to that," Aker said.

Meyer said he isn't sure of the idea behind the change.

"I guess they want to speed up the game," he said. "That's the benefit of it.