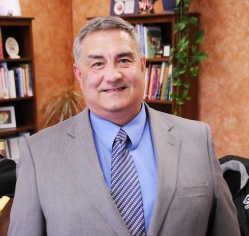 Greencastle Community Schools has filled its superintendent vacancy on an interim basis and did not have to go far to find the new chief.

Greencastle School Board president Denise Sigworth announced the hiring to the Banner Graphic on Wednesday after notifying GCSC staff earlier in the week.

"We are pleased to tell you that Mr. Jeff Hubble, currently assistant superintendent of Greencastle Schools, has graciously agreed to fill the role of interim superintendent for this year," Sigworth wrote in the letter. "Mr. Hubble's experience and familiarity with GCSC, and his involvement in the many initiatives currently underway, will provide important continuity in the coming months."

The board spent several months searching for a permanent replacement and spent last week in deliberations. Sigworth informed staff that the board was unable to reach agreement with its finalist and therefore designated an interim.

"The board is pleased to be continuing its great working relationship with Mr. Hubble, and is confident you will give him the same strong support you have shown to Mrs. Puckett during her administration," Sigworth wrote.

"We are extremely grateful to Mr. Hubble for his continuing leadership and service to the Greencastle Community Schools."