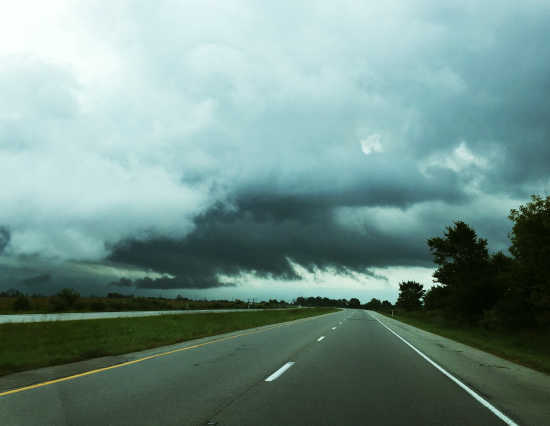 With tornadoes dominating the news again (see state story, Page 8A and editorial, Page 4A) following Wednesday's major Indiana incidents, it seemed spooky to see storms dance all around us without doing any major damage in Putnam County.

Talk about dodging a proverbial bullet.

Montgomery County got hit hard, especially the southeastern part, where some 30 homes were reportedly impacted by the tornado that skipped through Wednesday afternoon. Kokomo got clobbered, but like Montgomery County, escaped without serious injuries.

As of Thursday, 22 tornadoes had been confirmed in Indiana in the latest event. None in Putnam County, although meteorologists tell of watching the rotation that spawned some of the storms start in the skies above us.

All that begs the question: How frequently does Putnam County actually experience a confirmed tornado?

Surprisingly enough, the answer is rarely, according to records kept by the Indianapolis office of the National Weather Service (NWS).

In fact, those NWS statistics list only 20 tornadoes as being confirmed in Putnam County between Jan. 1, 1950 and the present. Twenty twisters in 66 years.

The last significant twister occurred near Bainbridge on July 8, 2003. That was the storm that did substantial damage to the Mark Timm residence and other structures along and around U.S. 36 on the west edge of Bainbridge.

Overall, Weather Service figures show the 20 reported Putnam tornadoes as responsible for $3.96 million in total property damage, causing one death (June 2, 1990) and 10 injuries (seven of which came in a May 10, 1969 twister).

Figures show the latest official tornado to strike within Greencastle city limits was reported Aug. 23, 2002 when the storm caused an estimated $200,000 damage.

Available tornado figures from the Weather Service also list the times when the twisters were reported.

Seven of the 20 Putnam storms occurred in the early evening, between 5:15 and 6:45 p.m., while four times twisters have hit locally between 1 and 2 p.m.

Overall, the numbers average out to make 2:27 p.m. the most likely time for a Putnam tornado occurrence.

Meanwhile, the earliest date for a tornado to strike the Putnam County area was March 20, 1976, while the latest twister reported in any year since 1950 was the Dec. 11, 1967 storm (another late-season storm occurred Nov. 22, 1992 and did major crop and farm building damage around the Russellville area).

One storm not included in the list is the devastating August 1990 Downburst that struck Greencastle, uprooting dozens of trees and causing the fire that destroyed the Presbyterian Church on College Avenue. The NWS laer determined it to be straight-line wind damage.

Also missing from the 1950-2016 Wether Service compilation are the March 26, 1948 Good Friday tornado that destroyed much of the town of Coatesville and killed 14 people, and the fabled Palm Sunday tornado of April 11, 1965 that somehow missed Putnam County but spawned 47 tornadoes as the deadliest tornado in Hoosier history with 137 deaths and 1,200 injuries statewide.