Despite losing QB, Clovers hold on for 'real win'

By Mason Asher, For the Banner Graphic

CLOVERDALE -- The Cloverdale Clovers came into Friday night the much smaller school pitted up against the 4A Edgewood Mustangs and used small school heart to prevail 20-18.

"It was a big win for us tonight," junior Tyce Jackson said. "We don't have a big tradition of winning or anything and when Drew went down, he's the leader on the team, everyone stepped up tonight, it wasn't just me." 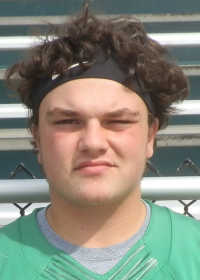 The Clovers (1-2, 1-0 WIC) battled back and forth all night long with the Mustangs (0-3, 0-1 WIC) in what was a game of field position and big plays. The Clovers defense outmuscled the Mustangs though for their first win of the season in thrilling fashion.

"This is my second year and this is our first real win," head coach Tony Meyer said. "I don't know if I could be more tickled. I am excited for our kids, it's all about them. The whole thing this year has been to take ownership and they took ownership and they never gave up."

After the first quarter, where the Clovers ran 21 plays to the Mustangs 'eight, it started to take some turns that no one thought would come. In the second quarter Clover starting quarterback junior Drew Boyette left the game due to injury and the coaching staff put junior Tyce Jackson at the helm.

It turned out to be the right choice, as the Clovers got on the board after a crazy play.

"There are not enough words I can say," Meyer said. "His father is my offensive coordinator and we said we have to go with Tyce. He is a very bright young man so it was kind of easy to hop on his shoulders and go. Just like (Drew) Boyette, Tyce is very much a coach on the field."

The Clovers had the ball at midfield but were forced to punt. The Mustang returner bobbled the ball and picked it up but not before sophomore Trey Henry crashed into him, causing a fumble which Henry recovered at the 20-yard line.

The very next play Jackson rumbled in from 20 yards out to put the Clovers on the board for the second time this season. The conversion attempt failed, but the Clovers held a 6-0 lead.

On the ensuing Mustangs possession they got the ball to Cloverdale's 14-yard line but the defense held solid and forced a field goal to send the game to the half, 6-3.

Three possessions in to the third the Mustangs scored to go on top after a 28-yard run by senior Logan Day. The Clovers' ensuing possession they would fumble on their first play, but the defense came up strong forcing a three and out.

Two plays into Cloverdale's drive, Jackson hit junior Tyler Kaeff down the middle for a 43-yard touchdown catch to get the lead back 14-11 in favor of Cloverdale.

Edgewood would answer the next drive on a 20-yard quarterback run by junior Andrew Graef as the horn sounded right after a pass interference call that went against Cloverdale.

This seemed to take all the energy out of the stadium.

Cloverdale would keep fighting and score again seven minutes into the fourth.

"We were kind of in a lull," Meyer said. "They had a hard time stopping Tyce. Our heart kept us going."

Cloverdale would use a ground-and-pound attack and a 20-yard pass from Jackson to junior Nick Winders to get the ball down to the goal line and Jackson would punch it in to take the lead 20-18 for good.

Cloverdale held stout and forced a punt on Edgewood's next possession and then had to punt it back with just under two minutes left. Edgewood could not advance the ball off of the 50 and turned the ball over on downs giving the Clovers their first win over the Mustangs in more than 20 years and their first win over a 4A program in 19 years.

"We made some great stops," Meyer said. "We did not quit, it was awesome."