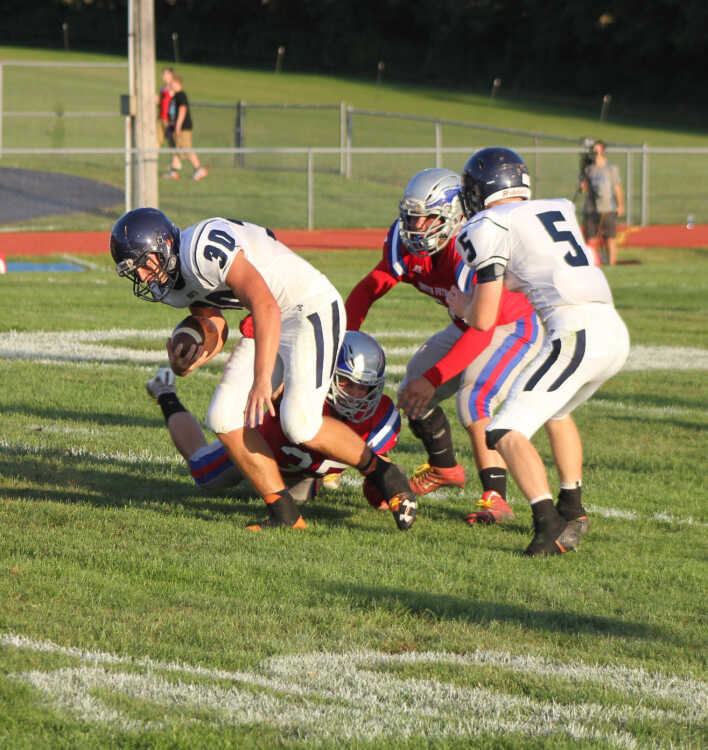 Solomon Gross had gained just 67 yards in the first two weeks of the season, but the North Putnam senior more than doubled that output in Friday night's 40-21 win over South Putnam.

Gross, a 6-foot-2, 230-pounder, carried the ball 22 times for 177 yards and four touchdowns as the Cougars were able to control the ball for a majority of the game and keep it out of South Putnam's hands.

"We knew he had the potential [for this kind of game]," North Putnam coach Greg Barrett said. "He ran like we thought he could run -- he ran 'lights out'. It's just getting him to understand what we're doing on offense."

While Barrett was impressed with the effort of Gross, he knows such a great game is not a one-man accomplishment.

"I am extremely proud of how hard he ran," Barrett said. "We had some great blocking out on the edges that really helped, too."

South Putnam coach Nathan Aker was also impressed by Gross and the wall of blockers in front of him.

"He's a really good player," Aker said. "He's got Buck Christy out there lead blocking for him, [Corbin] Judy does a tremendous job, and the big boys up front are really good. It was a thundering herd coming around the edge out there, and we didn't tackle very well."

North Putnam opened the game's scoring on the first drive, going 70 yards in 11 plays with quarterback Hayden Rudes scoring from two yards out on a sneak. 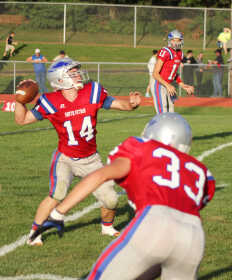 South Putnam retaliated on its first offensive play, but not in a conventional sense.

Standout running back Kyle Shaffer took a pitchout, ran back and forth looking for a hole, then pulled up and lofted a perfect throw downfield to senior Hunter Higgins. The 73-yard scoring play tied the game with 5:06 left in the first quarter.

"We ran a lot of toss sweep last week," Aker said, "and we thought that might be open. It was a nice spark for us in the first half."

Barrett has coached in enough North Putnam-South Putnam games to know that such tactics should never be taken as a surprise.

"They got us," he said. "In this game, you never know what's going to take place. Coach Aker does a great job with those guys, and this is a game where you have to be ready for anything."

North Putnam took over near midfield after a short kickoff, and Christy did most of the running damage as the Cougars marched 52 yards to take the lead for good. Gross scored from three yards out, and Gage Bell added the extra point for a 14-7 advantage.

The Cougars held South Putnam on downs on the following series, but fumbled on the sixth play of the drive to give the Eagles the ball at the NP 26.

Shaffer ran two straight times, scoring from 19 yards out to cut the gap to 14-13.

"I was only upset about two plays in the game," Barrett said. "I didn't like that turnover, and the halfback option pass."

The Cougars hadn't passed much in the first two games, but Rudes threw the ball 12 times and completed seven of those tosses.

He had three straight completions to Max Haste on the last NP drive of the half, with Gross scoring from three yards out just 13.9 seconds before halftime.

The third quarter was played to a draw, but the Cougars took over on their own 29 late in the period to begin a drive that would end with Rudes scoring from three yards out early in the final period for a 26-13 lead.

There was no quit in the Eagles, with big runs from Shaffer and Dalton Scott helping them to drive for a score to keep things close. Sophomore quarter Allen Plunkett scored from two yards out, and it was 26-19 with 8:08 left.

The Eagles were done scoring, and Gross was just getting warmed up.

North Putnam took over on its own 43 after Plunkett's touchdown, and Gross ran for carries of 10 and 47 yards to give coach Barrett breathing room again.

Luke Mitchel turns upfield after making a catch against South Putnam on Friday.

Both coaches agreed a key to the game was North Putnam's ability to control the ball and time of possession, and keep the ball out of South Putnam's hands for a large percentage of the game.

"That's what we wanted to do," Barrett said.

"They sure did control the ball," Aker said. "We talked about having to control the line of scrimmage to be able to win, and they definitely did that better than us. I think we could have done some things offensively, but we just didn't have the ball."

Shaffer wound up with 120 yards on 18 carries, numbers any high school running back would gladly take but ones which may make it seem the Eagle senior had an off night.

"We've gotten spoiled around here over the past few years, thinking Kyle has to have over 250 yards to have a good game," Aker said of a feat Shaffer has accomplished numerous times. "He had over 100 yards, and he earned every inch of it. I was proud of his effort again."

Aker has had the task of almost rebuilding his entire offensive line, and he likes the progress being made but knows the unit isn't a finished product yet.

"It's a work in progress, and we're getting there," he said. "We're still chopping away, trying to get our mojo together. We blocked to the whistle better this week."

Next game -- North Putnam (3-0) will play its fourth straight road game as the Cougars travel to Sullivan, while South Putnam (2-1) travels to Greencastle.