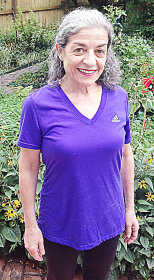 Ruth was the Executive Director of the Johnson Nichols Health Clinic much of her adult life. Now retired, she serves on the Board of Directors for the Beyond Homeless women’s and children’s shelter.

Ruth is a member of the League of Women Voters, an avid walker and a recipient of the Sagamore of the Wabash award.

Ruth Ralph will be walking on Cemetery Road to the Civil War Monument to complete her segment of the bicentennial torch relay. 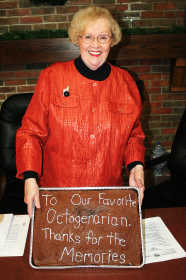 Jinsie is a walking history book of Putnam County and its residents and was the first female owner of a radio station in Indiana.

Jinsie is a civic activist who has served on the Greencastle City Council and as president of the Putnam County Community Foundation, Greater Greencastle Chamber of Commerce, Putnam County Museum, Rotary, Historical Society and other organizations.

You can see Jinsie Bingham carrying the torch in a 1928 Studebaker Fire Truck from the Civil War Monument, along Veterans Memorial Highway then north to the Daughters of the American Revolution cabin at Robe-Ann Park. 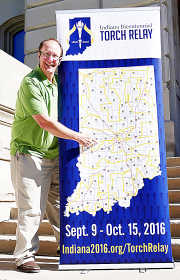 “Figgy,” as many people know him, is a disc jockey, a popular local entertainer and is often asked to serve as master of ceremonies at local events. Figgy was described in his nomination as “an all-around great guy.”

Jim Hardwick will be running from the Daughter’s of the American Revolution Cabin at Robe Ann Park to Anderson Street for his part of the relay route.

Check out the Monday Banner Graphic for the next three torchbearers.