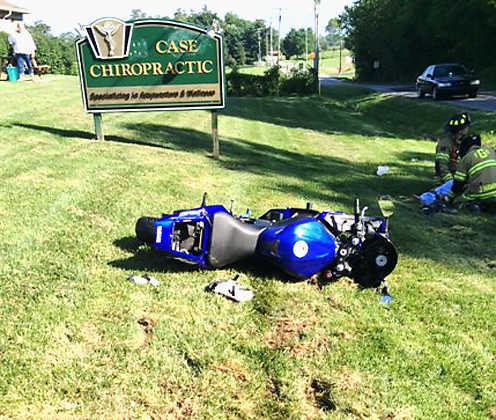 Courtesy photo A motorcycle driven by Brandon Buttery came to rest on the grassy area along the west side of Round Barn Road at Ridgeland Road in Greencastle.

The operator of a motorcycle and his female passenger were injured Wednesday in a car-motorcycle accident on Greencastle’s East Side.

Greencastle City Police officers were dispatched to a traffic accident with reported injury at the intersection of 10th Street/Round Barn Road and Ridgeland Road.

They also reported seeing a northbound 2012 Honda Accord driven by Sharon Spurr, 76, of Greencastle.

Witnesses told Officer Eastham that the Spurr vehicle attempted to turn left onto Ridgeland Road as the motorcycle, a 2004 Yahama driven by Brandon Buttery, 33, of Greencastle, tried to pass the Spurr car in a no-passing zone, reportedly at a high rate of speed.

Witnesses also reported that as the Spurr vehicle turned left onto Ridgeland, the motorcycle collided with the left front fender of the car, causing the bike to roll into a grassy area on the northwest corner of the intersection.

Jennifer Buttery was airlifted to Methodist Hospital at Indianapolis by Stat Flight air ambulance in serious condition. She reportedly sustained serious injuries to her head and abdomen, and breaks in all of her extremities, Officer Eastham’s report noted.

Brandon Buttery was taken to Methodist Hospital by Operation Life Ambulance Service with reported injuries to his head, back and pelvic region.

Spurr was reportedly shaken up by the incident, but declined medical attention, police said.

Brandon Buttery faces preliminary charges of reckless driving, criminal recklessness with a vehicle, operating a motorcycle without an endorsement, operating an unregistered vehicle and operating a vehicle without financial responsibility.