The Friday pep rally at Greencastle High School was no exception, the last big event of homecoming week aside from the game itself.

That didn’t stop Greencastle Principal Russ Hesler from making a big academic announcement during the rally and giving that announcement the full athletic treatment. 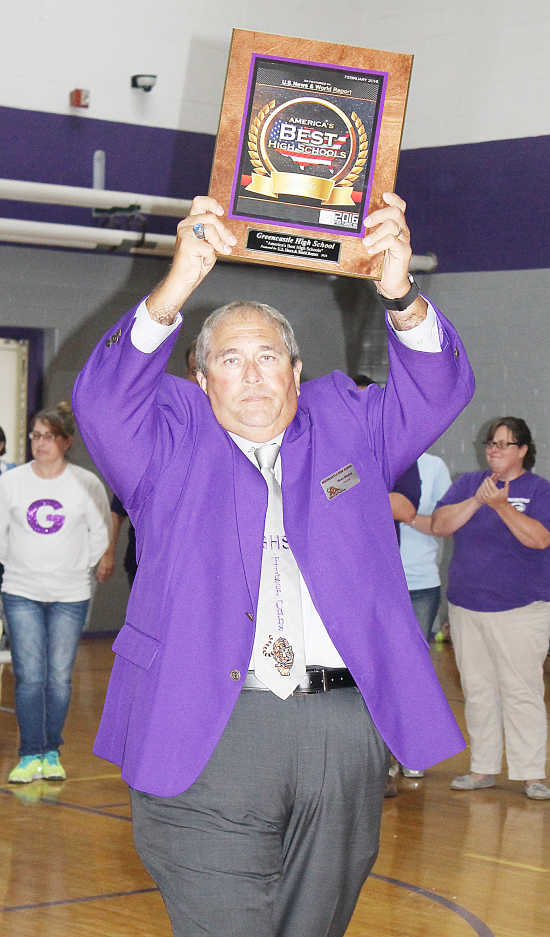 Banner Graphic/Jared Jernagan Marching around the GHS multi-purpose room as he unveils the new America’s Best High Schools plaque, Principal Russ Hesler fires up the student body before gathering the faculty and class presidents for a photo with the new honor.

With alternative teacher Doug Hudson acting as his emcee/hype man for the event, Hesler unveiled a new plaque that will hang in the school — The U.S. News and World Report America’s Best High Schools 2016 award.

With the entire student body gathered in the GHS multipurpose room, Hesler unveiled the plaque and marched it around the gym floor like a sectional championship trophy.

He then carried it in front of the faculty, high-fiving each one as he went through the line.

The faculty, four class presidents, Tiger Cub mascot and Hesler then gathered for a sort of team picture with the plaque.

With the seniors going on to win the spirit week competition and the football team defeating South Putnam later that evening, it was just another day living by Hesler’s mantra: “It’s always a great day to be a Tiger Cub.”