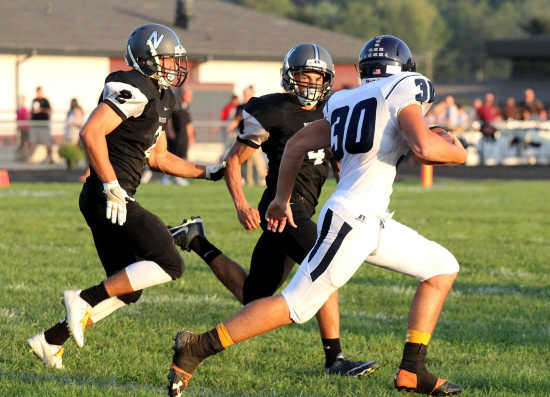 North Putnam's Ethan Christy turns the corner for a 15-yard gain in the first half of the Cougars' game at Northview.
Brazil Times/Carey Fox

BRAZIL — In a battle for the second-place spot in the Western Indiana Conference West Division, turnovers played a pivotal role as North Putnam traveled to Northview on Friday evening.

Unfortunately for the Cougars, the Knights came out on top of the turnover battle as well as the scoreboard, 34-13.

The Cougars punted to the Knights after being stopped following a first down. Northview took over on its first possession and strung together a run-based attack that culminated in a 36-yard TD run by MJ Shelton. The Knights marched 92 yards on just six plays as Dylan Hyatt ripped off a 42-yard run on the second play of the drive.

The turnover bug reared its ugly head on the Cougars’ next drive as Ethan Christy lost the ball at midfield on a pitch play that was interrupted by the Knights’ charging defense. Northview’s Braddok Whistler scooped the ball and returned it to the Cougars’ 20-yard line. However, North Putnam countered right back by forcing a fumble on a pass play to their own five-yard line.

Northview would fumble on its next drive as well, but the play proved to be a turning point of sorts.

Hyatt broke free on a 23-yard run, but was stripped near the goal line. The ball scooted into the Cougars’ endzone, but was recovered by the Knights’ Trevor Cook for a touchdown and a 14-0 lead.

“We can’t get ourselves where we are two touchdowns down,” Cougars’ coach Greg Barrett said. “We did this a couple of weeks ago. We have to figure out how to play in the first half and control the ball and not make mistakes.”

North Putnam forced a Northview punt on its next series, but the Cougars’ offensive possession was short lived as Hyatt picked off a Hayden Rudes pass. Five plays later, Northview pushed the lead to 21-0 on a 10-yard run by Hyatt that capped the first half scoring.

Barrett lamented some of his team’s mistakes after the game.

“Penalties will kill ya. We talk about it all the time. In this conference, the least amount of turnovers and penalties is going to win the game,” Barrett said. “Unfortunately we were on the other end of that tonight. We’ll keep preaching it, keep working at it and get it fixed.”

North Putnam’s first drive of the second half found paydirt as the Cougars went to the passing game successfully.

Rudes completed three passes, two of them to Max Haste, who had nine catches in the game. His third completion was to Luke Mitchell down to the Knights’ 16-yard line.

“We do a nice job at times. The problem is we have to do it consistently,” Barrett said of the team’s passing game. “That is something we keep preaching. In practice we work on different scenarios and situations.”

Three plays later it was Solomon Gross scooting around the right side and powering down the sideline for a 22-yard TD.

North Putnam wasn’t able to hold on to the momentum very long however as Northview took over at its own 41-yard line and Hyatt took the handoff on the second play and raced 60 yards for a TD and a 22-6 Knights’ lead.

Gross would counter Northview’s score with his second of the night on a six-yard run that capped a 12-play drive and got his team within 27-13.

Northview would answer however as quarterback Trey Shaw found Hyatt for a 30-yard TD pass on a fade route with 3:44 left to seal the game.

“It just comes down to being mentally tough when you have to handle adversity and flip the switch and not get your head down and play the next play type of deal,” Barrett said. “I thought they fought hard and didn’t quit. They definitely fight to the end.”

North Putnam falls to 4-2 this season, 1-2 in the WIC, and host West Vigo on Friday.