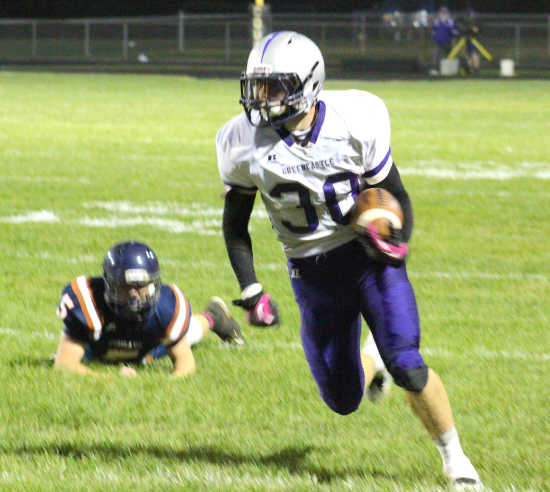 ROACHDALE Ś With the Putnam County championship on the line, GreencastleÆs Devin Clar knew he had to step up his game.

ThatÆs not easy to do, already being one of the stateÆs top running backs, but the senior found another gear in scoring three touchdowns and leading his team to a 28-17 win over North Putnam for the county title.

ōKnowing that itÆs the championship game, being our senior year and all, you fight and try staying up as much as you can,ö said Clar, who gained 118 yards on the night. ōThis win is huge, especially taking the bucket back after losing it last year. We have worked hard to get it back.ö 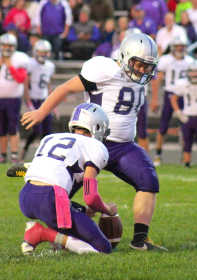 The way the game started out, it looked like the final score would more resemble a basketball game than a football game.

North Putnam had already gained three first downs after four plays Ś two on Solomon Gross runs and one on a Hayden Rudes pass to Max Haste Ś and marched 64 yards in seven plays to get on the scoreboard with a 26-yard field goal by Gage Bell.

Greencastle took over on its own 32 and marched right back down the field, with Clar and Derek Ummel taking turns on the ground. Ummel scored from four yards out with 2:40 left in the opening quarter to put his team up 7-3.

The Cougars then made what could have been a catastrophic error, touching the ensuing kickoff at their own 1 before the ball went out of bounds Ś putting them in a deep, deep hole.

North Putnam didnÆt panic, though, and more hard running by Gross and a 30-yard Rudes-to-Haste aerial put the home team in much better position.

Gross eventually scored from seven yards out to regain the lead for his team at 10-7.

The back-and-forth scoring drives continued, as Nick Costin had a nifty 24-yard run and Clar added a 17-yarder as the Tiger Cubs marched right back down the field. A Clar 8-yard touchdown run with 7:13 left in the half made it 14-10.

North Putnam retaliated again, as Rudes Ś scrambling and dodging defenders like Johnny Manziel in his college days Ś broke away from pressure and found a wide-open Corbin Judy on the right sideline. Judy carried the ball 63 yards down to the Tiger Cub four, and Haste scored on a rare running attempt from two yards out to flip the seesaw back in North PutnamÆs direction at 17-14.

There had been five possessions to that point, and each had ended in points.

The offenses took off the final few minutes of the opening half, and the Cougars carried that 3-point lead into intermission.

Neither teamÆs defensive coaches could have been happy with their inability to stop the other teamÆs offense.

The Tiger Cubs clamped down on defense, allowing no points and just two first downs the rest of the way.

ōWe got in the locker room and talked a little bit, and realized what we had in our hands,ö he said. ōIt was all willpower from there. We didnÆt give them much in the second half.ö

ōGoing into halftime, the coaches came in there and got guys where they needed to be,ö he said. ōThe coaches had us in the perfect positions after the first half.ö

Winning coach Mike Meyer was understandably pleased with his teamÆs effort over the final 24 minutes.

ōWe had a very good second half,ö he said. ōIt was a heckuva ball game. We stayed with our base front, but we moved some linebackers and we were able to handle them.

NP coach Greg Barrett, equally as drained as Meyer following the game and also without much of a voice left, thought the second half came down to one simple fact.

ōWe couldnÆt tackle Clar,ö he said. ōWe hardly had the ball in the third quarter, and when we did get it we had two three-and-outs.

ōWe had too many penalties,ö Barrett added. ōWe didnÆt come out well in the second half and they outplayed us. ThatÆs a good football team, and theyÆre 7-1 for a reason.ö

Clar came out even more focused in the second half than the first, and had two runs of more than yards as the Tiger Cubs scored in just three plays after returning the kickoff to their own 46.

The Tiger Cubs had a three-and-out of their own sandwiched between North PutnamÆs stalled drives, but embarked on the gameÆs final scoring drive late in the period.

Taking over on its own 21, Greencastle chewed up a huge chunk of time in marching down the field in nine plays. Clar scored from four yards out with 23.7 seconds left in the period.

The final period was uneventful, and the Tiger Cubs wrapped up second place in the Western Indiana ConferenceÆs West Division with the victory. They will host Owen Valley, the second-place team from the East Division, in FridayÆs crossover game.

North Putnam finished fourth in the West Division, and will host Cascade on Friday in the last week of the regular season.

Barrett is enthused that there is still time left to make up for this game.

ōHopefully we can learn from it and get better for the playoffs,ö he said. ōA new season is getting ready to start.ö

Meyer understandably reflected upon the reciprocal nature of his team from a year ago.

ōLast year at this point we were 1-7,ö he said. ōThis is great for our seniors. We had a great turnout in the stands, we beat a good football team on their field and IÆm happy about it.

ōWe have two more tough games coming up, and hopefully some more after that.ö 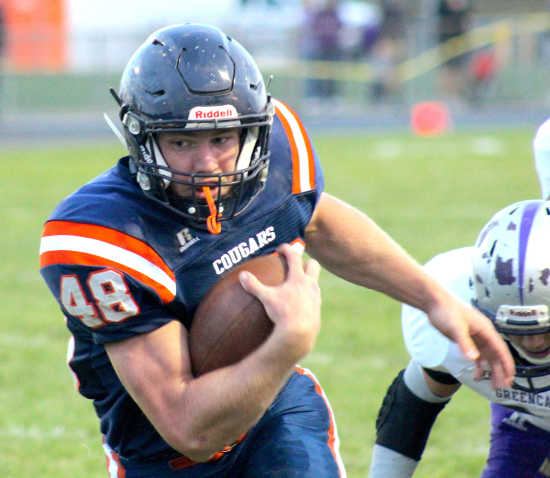