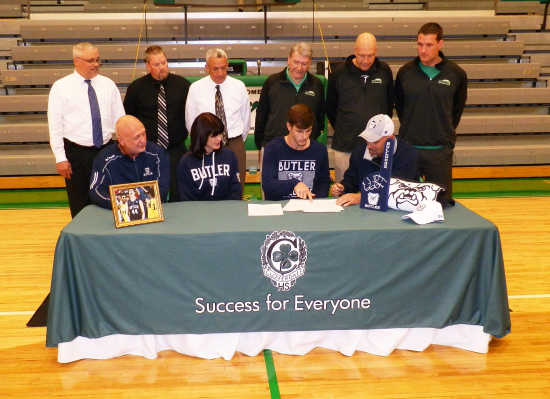 Clover senior knows he has work yet to do

CLOVERDALE — When Cooper Neese woke up on Wednesday morning, the first thought he had was “whoa.”

About eight hours later, the Cloverdale High School senior was in the school’s gymnasium signing his national letter-of-intent to play college basketball for Butler University next winter.

“Adulting,” a recently-coined term, had officially begun for the humble 18-year-old.

“This is something I’ll remember and cherish for the rest of my life. “

Neese has had limited discussions with future coach Chris Holtmann and his staff about his exact role as a Bulldog when he eventually dons the navy blue and white, but things change frequently and he knows he needs to be able to play either shooting guard or point guard.

“They’ve talked about both of those, or being a ‘combo’ guard and playing either spot,” he said. “I’ll go with whatever they want me to do to help the team win as many games as possible.”

Before committing to Butler in December of 2015, early in his junior year, Neese had received scholarship offers from Indiana State, Ball State and Evansville in addition to being contacted by numerous other schools.

“I liked all of those schools, but Butler came across with interest the summer between my sophomore and junior years, and that kind of piqued my interest,” Neese said. “Butler was just over the top, and that’s the school I wanted.”

In college football, players who make verbal commitments often continue to be pursued by competing schools until they eventually sign the official NCAA paperwork.

Neese did not get any direct attention from other schools in the past year, but that doesn’t mean there wasn’t interest.

“I had a pretty good summer this year,” Neese said. “My AAU coach [Michael Peterson], who was here at the signing, told me ‘You’re going to make it interesting’.”

Neese asked him what he meant, and Peterson said he had schools calling him constantly trying to get Neese to de-commit.

“I told him to tell everybody that’s not happening,” Neese said.

Neese has helped the Clovers to a 60-16 record over the past three seasons, and sectional championships the past two years.

Should Neese and his team repeat that title next spring, the “three-peat” would equal that of the school’s run from 1981-83 that also had a player named Neese filling up the basket.

Jerry Neese, Cooper’s father, would like nothing better than for his son to tie the sectional streak and is excited about the opportunity at Butler.

“I just love it, and I’m as excited as heck for him,” Jerry Neese said Wednesday. “He’s put in more time than anybody I can ever remember at Cloverdale and I’ve always been a part of it. The dedication is there, and it will always continue to be there.

“I’m just super proud of what he has already done, and looking forward both to this year and when he moves on to Butler.”

Neese said Cooper’s dedication to the game started at about age nine.

“When you start throwing a ball at a little plastic goal at that age, and younger, that shows your interest level and helps you,” he said. “He was pretty consistent with it, going five days a week even at that age.”

That dedication has only increased as the years have gone by.

“Now, he’s lucky if he takes off one day a week,” he said. “We come in here and shoot after hours all the time, and you don’t have to force him to do it. He’ll ask. That’s the kind of dedication I absolutely love.”

Jerry doesn’t see a lot of similarities between the two players, but he’s glad his son is following the same path as his friend.

“Chad was taller and they play different positions,” Jerry said. “It’s neat that he gets to go to Butler from Cloverdale like Chad did, and we’re hoping for big things from him.”

While Tucker and Neese formed a potent 1-2 punch more than 30 years ago, Cooper is not without a similar cohort in speedy junior guard Jalen Moore.

“The situations are pretty comparable,” Jerry said. “Jalen is a little smaller, but he’s very quick. Those two are good together. You can’t put two guys on Cooper and two on Jalen.”

Jerry’s 1980s version of the Clovers had several role players who had vital roles in the team’s 1983 regional title and semistate appearance, and he knows this year’s squad will need to have the same contributions.

“I think we’re going to have a couple of kids who can step up this year and hit a few shots, and that’s going to make a big difference,” said Jerry Neese, a volunteer assistant coach with the team. “Cooper and Jalen are going to get their points any way.

Chad Tucker played for his father, Al, and Cooper has played not only played for his own father at Cloverdale but for another father-son coaching duo.

He is similarly proud of Cooper and his accomplishments.

“It’s a great honor, and Butler is a great program,” coach Rady said. “You don’t see players leave Butler without getting better.

“Cooper has a lot of potential, and his best basketball is in front of him,” he added. “He’s done a great job here at Cloverdale, and I was very fortunate to coach him for two years.”

“The Neese family has been very good to coach Rady,” Pat said. “[Cooper’s brother] Michael was an excellent player as well, and was a big part of the first sectional title we had here when I coached [in 2007].

“Jerry has been a staple of the program, and led the Clovers a lot during his days here besides being very helpful as a volunteer coach.”

Rady thinks Cooper is the exact kind of player that Butler has used to raise its program from the level of average mid-major to national power.

“Cooper has been under the radar as far as ratings, and the fact that the Butler coaches found him is a credit to them,” he said. “That’s what Butler has lived on, finding the hidden guys like him. They have done well with taking guys like Cooper and taking them to the next level.”

Patrick Rady took over for his father last season, and led the Clovers to a 19-8 record.

Besides the obvious benefits of having one of the nation’s top players in his lineup, Patrick sees additional pluses.

“It’s definitely exciting for our program,” he said. “Every kid in our high school program wanted to be here when he signed, and it’s been a program changer for us down through our youth groups.”

Cooper serves as a role model for the younger future Clovers.

“Cooper has been very active in working our basketball camps and showing up at our elementary league practices,” Patrick Rady noted. “The kids in this community look up to him. When you have an impact player like him, kids gravitate toward that.

“He has helped to revive interest in basketball in the Cloverdale community, and we are seeing that with the numbers in our youth program and our summer camp.”

The four-player recruiting class that Butler coach Chris Holtmann has put together is ranked by some publications and recruiting services as one of the top 10 in the nation.

Neese has played against Jerald Butler a couple of times in the summer over the past few years, and also has become acquainted with Kyle Young and Christian David — despite the fact that those players hail from Ohio, Vermont and Florida.

Among that quartet, Neese was the first one to declare his intentions to be a Bulldog.

“Cooper was our first recruit in this class,” Holtmann said Wednesday. “He is excited about coming to Butler, and that showed in the way he helped to recruit the other three guys. Cooper has the appropriate label as a shooter, but he can score in a variety of ways, and has good athleticism that helps him on the defensive end. He is one of the state’s top scorers and has played against high-level competition in AAU.”

Some of Neese’s other former teammates are also going to national powerhouses around the country.

Paul Scruggs, formerly of Southport, now attends Prolific Prep in California and will sign with Xavier. Kris Wilkes of Indianapolis North Central will announce this weekend whether he will sign with Indiana, Illinois or UCLA.

Gary Trent Jr., son of the former NBA star, also now attends Prolific Prep and formerly played with Neese on an Indianapolis-based traveling team as did Michael Porter Jr. — who will be playing at Washington.

No knock on Cloverdale’s Al Tucker Court, but having the hallowed Hinkle Fieldhouse as his future home is also appealing to Neese.

“It’s terrific,” Neese said of the recently renovated Butler gymnasium. “Having good friends as those high-elite level players at schools all over the country will be great too. It will be fun to watch them and play against them.”

With visions of Hinkle and Butler understandably dancing in his head, Neese knows he needs to put those thoughts on the back burner because he still has work to do in his last year as a Clover.

“He’s a goal-driven person,” Patrick Rady noted. “The only thing he talks about is trying to win a state championship for Cloverdale. That tells you about him as a person.

“He’s team-oriented, and the ‘Butler Way’ fits him perfectly with the type of players and culture that have made their program successful.”

Besides a state title, Neese knows he needs to work on one specific area of his game to keep improving himself for his college future.

(Rankings according to 247sports.com)