Trying to clink glasses when you can’t see isn’t very easy, Dean Gambill of the Putnam County Community Foundation discovers Thursday evening as he attempts to toast guest of honor Von Braden during the Dining in the Dark event at the Inn at DePauw. Braden, who lost her sight to retinitis pigmentosa, (below) addresses the dinner gathering, offering tips on how to eat without being able to see your plate.
Banner Graphic/ERIC BERNSEE

Age-old logic suggests you can't really judge another person's situation until you've walked a mile in his or her shoes.

That may be so, but footwear wasn't the issue Thursday evening when about 45 people dined in the dark to empathize with Yvonne "Von" Braden and her blindness.

Through a three-course meal at the Inn at DePauw, guests donned sleeping masks to cover their eyes and bibs to keep their clothes clean while enjoying fruit and cheese, prime rib, sweet potato puffs, roasted red potatoes, broccoli, dessert candies and more in honor of Braden.

The "Dining in the Dark" adventure was the brainchild of Chuck Schroeder, emeritus executive director of Putnam County Comprehensive Services, where Braden has worked as a receptionist first from July 1995 through 1999 and then part-time currently since March 2011.

"Von has always impressed me," Schroeder praised, noting that despite her blindness, she would come to work with her clothes nicely ironed and perfectly matched and her make-up flawless. "I thought, 'Why can't I be like that?'"

Despite losing her vision about 20 years ago in a gradual battle against retinitis pigmentosa, Braden has wanted to be treated like everyone else. She's even had a couple of running gags with Schroeder about her sight. 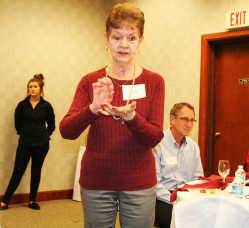 "Von and I had an understanding," Schroeder jokingly told the group after dinner. "If she gave me any trouble, I was going to move the furniture on her."

And whenever the longtime PCCS director would leave the office, she would dutifully tell him, "I'll see you later," essentially just to get Schroeder to good naturedly supply the punch line, "No you won't, Von."

Prior to dinner, Braden stood before the group of friends and associates and explained what it's like to blindly tackle a plate full of food.

She told them how she really has three jobs, one at PCCS, another as the Putnam County contact for the Wabash Valley Living and Learning Center, and volunteers one day a week at the Putnam County Community Foundation.

If that's not enough, she works out twice a week at Steve St. Pierre's All-American Karate Academy and conducts a low-vision support group for 13 people.

"Any questions, ask them now," Braden continued, "because I'm in the dark."

Offering hints like keeping your dinner roll at 12 o'clock on your plate and not being afraid to use your fingers to eat even the prime rib, which was cut into small chunks, Braden said getting a little messy can come with the territory.

"I'm glad they gave you all bibs," the energetic guest of honor said, "because there are colors I wear very well ... mustard, ketchup, barbecue sauce, spaghetti sauce, chocolate."

You might think the hardest thing for her to eat might be soup or mashed potatoes, but surprisingly she said it's a little green veggie.

With her loss of vision, Braden says she misses seeing the stars at night, and sadly notes that she's never seen her grandchildren.

"But people I knew when I could see," she said, "don't age in my mind. Then when I make new friends, I develop a picture in my own mind of how they look."

As she was losing her vision, Braden says she "just got mean," pining, "Why me, why me" as her sight dwindled to where it was as if she was "looking through binoculars the wrong way."

Eyesight, Braden thus assures "is such a precious gift."

While her fellow diners got a taste of what it's like to be blind, Braden invoked another of her senses to absorb and the atmosphere and enjoy the evening.

"What made my night," she said, "was hearing everybody laughing and having a good time."

Apparently what you see -- and hear -- is what you get. 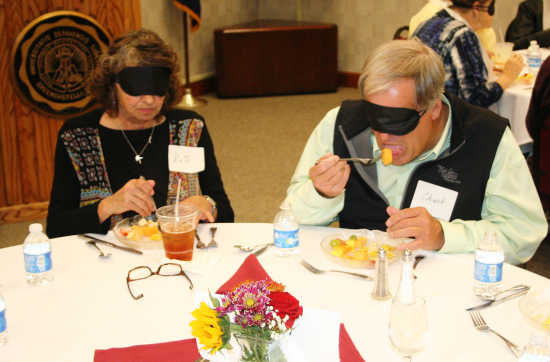 A blindfolded Dining in the Dark instigator Chuck Schroeder tries to eat a sweet potato puff while dining alongside wife Ruth Thursday at the Inn at DePauw.
Banner Graphic/ERIC BERNSEE
Comments
View 1 comment
Note: The nature of the Internet makes it impractical for our staff to review every comment. Please note that those who post comments on this website may do so using a screen name, which may or may not reflect a website user's actual name. Readers should be careful not to assign comments to real people who may have names similar to screen names. Refrain from obscenity in your comments, and to keep discussions civil, don't say anything in a way your grandmother would be ashamed to read.
Respond to this story