Tigers take back the Bell 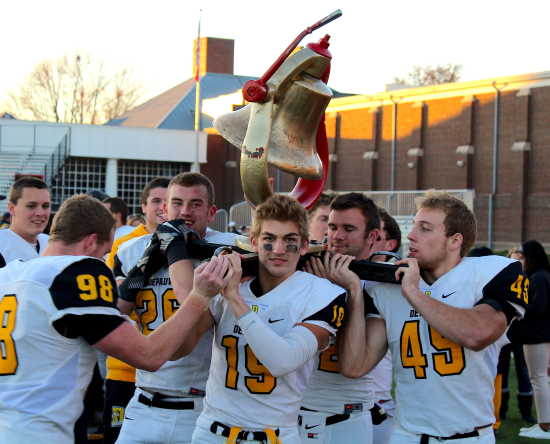 CRAWFORDSVILLE -- For the first time in eight years, the DePauw University Tigers have brought home the treasured Monon Bell, having defeated Wabash College 37-34 Saturday in the 123rd matchup and a game that seemed to teeter-totter on the brink of both elation and despair.

Coming down to the final possession, at which time DePauw trailed by four points, Tigers’ senior quarterback Matt Hunt connected with sophomore wide-out and brother Andy Hunt for a 13-yard strike, leaving just 38 seconds on the clock after a drive that went 80 yards in only six plays to put DePauw on the winning end of the 37-34 score.

Hunt’s game-winning pass to his brother was his second of the day through the air after an impressive three rushing touchdowns earlier in the game. 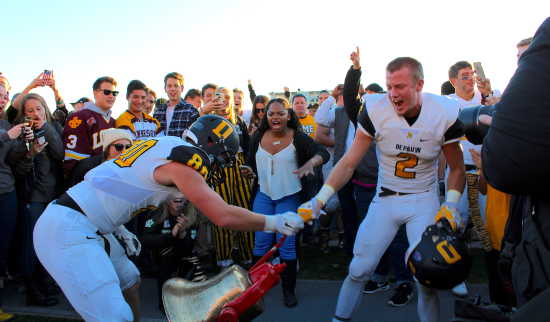 Players and fans alike ring the historic Monon Bell Saturday, earning the right to bring the bell back to DePauw after defeating Wabash College 37-34 in the 123rd showing of the classic matchup.
Banner Graphic/NICK WILSON

With a total of 400 yards and five touchdowns Saturday, Hunt chewed up 159 on the ground while throwing for 241. His most-targeted receiver was junior Ian Good who reeled in nine catches for 128 yards and a touchdown late in the first quarter.

Tigers coach Bill Lynch later described the winning push, saying he would rather have Hunt under center than any other quarterback, especially under such circumstances.

“We practice for that situation all the time because you never know when it’s going to be the difference in a game,” Lynch said. “And it helps to have a quarterback like Matt out there who has such great experience and has been there before. He’s played a lot of football for us and is a great leader as well as a great player.

“There’s nobody else you’d want to have out there on a two-minute drill like that,” Lynch continued, noting that Hunt remained composed until it was time to celebrate. “We’re really happy for him and he sure was happy when the game was over.”

Hunt, a fourth-year member of the team and long-time quarterback, has thrown for 2,580 yards and scored 26 times this season while boasting just eight interceptions through 249 completions.

“He directed it and everyone made the plays,” Lynch added.

Saturday’s Monon Bell Classic, considered the oldest continuous football rivalry west of the Alleghenies, was officially the 123rd matchup of the two teams and regularly draws a crowd of approximately 10,000. Wabash claims a slight advantage in the game’s history, winning 60 while losing 54. A total of nine ties have occurred since the game’s first matchup in 1890.

“The game is such a great tradition and there’s so much history to it,” Lynch said. “And (since) we hadn’t won it in seven years, it adds up because even though our current players are new to it, they’re part of the history -- there was lots of pent up emotion there.

DePauw now finishes the season with a record of 8-2 overall and a 7-2 record in the North Coast Athletic Conference. Wabash, not to be outdone, now has an identical record after hopes of a one-loss season fell through the cracks Saturday. 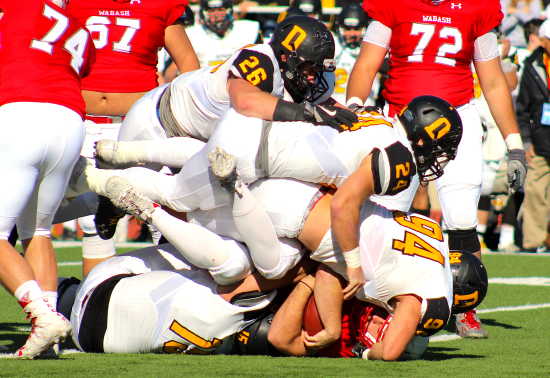 DePauw defensive players Joel Kauth (from top to bottom), Will Longthorne, Michael Mitsch and Pete Nelson tackle Wabash quarterback Connor Smith for a loss of yardage Saturday during the 123rd Monon Bell Classic in which DePauw emerged victorious by a score of 37-34.
Banner Graphic/NICK WILSON

And with the Tigers effectively out of the playoff picture, they were able to play the spoiler for the Little Giants Saturday, keeping Wabash out of the postseason. Both schools, along with Denison University out of Ohio, can claim second place in the conference with a three-way tie.

Only league champion Wittenburg, who’s currently riding a four-game winning streak and sits alone at the top of the conference after seeing only one loss in 2016, received a bid to enter the playoff scene in 2016 from the NCAC.

The first score of the day came when Hunt scampered in for a four-yard rushing touchdown, bringing to fruition a drive that went 65 yards in seven plays. With the subsequent point-after attempt made by Tiger place kicker Marko Adams, DePauw took the first lead at 7-0 with 13:12 remaining in the opening quarter. 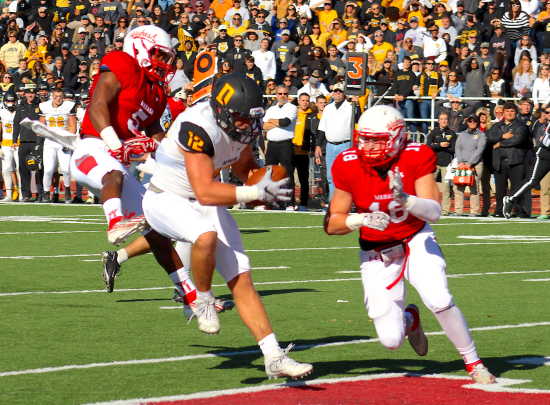 Forcing Wabash to punt, DePauw quickly scored again on its next possession, this time through the air when Hunt hooked up with Good for a 20-yard touchdown pass, putting the Tigers up 14-0 after another extra point by Adams.

Managing to put the first points on the board for Wabash was Little Giant place kicker Andrew Tutsie, making a 45-yard field goal with 12:38 left in the second quarter to cap off a nine-play, 38-yard drive that made the scoreboard read 14-3 while taking more than three minutes off the clock.

Next to score was again DePauw, answering the Wabash field goal with one of its own with 10:58 left in the first half. Adams was again good from distance, making a 28-yard field goal to take the Tigers’ lead back to 14 points with a 17-3 score.

The Little Giants’ first touchdown of the day came with 7:17 left in the second quarter when six-foot, 230-pound sophomore running back Matt Penola punched in a one-yard run, again capping off a more than three-minute drive to send the matchup into the break as a one-possession game at 17-10. Penola scored two touchdowns Saturday for the Little Giants while rushing for 50 yards on 20 attempts.

Returning from halftime, Penola single-handedly tied the game at 17-17, scoring his second touchdown in similar fashion by running in a one-yard strike at the 8:12 mark.

However, DePauw would answer by taking only 39 seconds to score. After two unfruitful plays, Tigers’ quarterback Hunt broke free and ran for 51 yards to score again take the lead for DePauw at 24-17 with 7:27 left in the quarter.

Until late in the third quarter, DePauw undoubtedly had the momentum on its side, but the momentum began to shift with Wabash putting up 10 unanswered points in two possessions.

Resulting in nearly six minutes of possession and 81 yards through 12 plays, Wabash closed the third quarter after sophomore wide receiver Oliver Page caught a 28-yard touchdown pass from senior quarterback Connor Rice to tie the game at 24. Then, after forcing a quick Tiger three-and-out and with 6:04 left in the game, Wabash kicker Tutsie put in a 39-yard field goal to give the Little Giants their first lead of the day at 27-24.

Rice threw for 336 yards Saturday, completing 26 of his 36 attempts. Scoring two touchdowns through the air, Rice’s favorite receiver was Page who pulled down 11 receptions for 188 yards and two touchdowns.

With less than five minutes left in the game and down by three, Hunt gained 50 of his 400 yards by breaking free at midfield with a 50-yard touchdown run to take the lead back at 30-27. However, with another Rice-to-Page touchdown pass at the 2:06 mark, DePauw found itself down 34-30 and needing a touchdown at the two-minute warning.

That is when what coach Lynch called “a great human interest story” began.

The Hunt brothers became the stars of the game when older brother Matt hooked up with Andy for a 13-yard touchdown pass with just 0:38 left in the game to yet again retake the lead, giving the game its final score of 37-34 in favor of the visitors from Greencastle.

“I thought both teams played really well and fought really hard,” Lynch said. “But we were able to make the plays we needed on that last drive. We had great protection, great passing and (Matt’s) brother Andy caught the winning pass.” 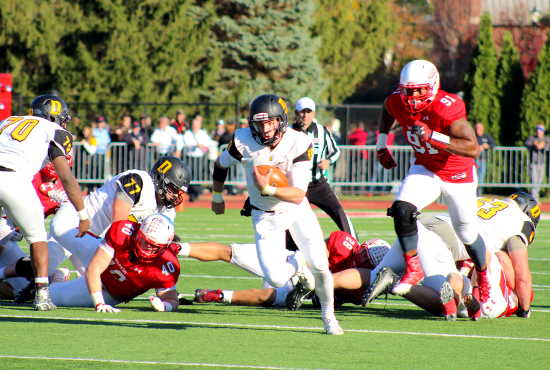 DePauw senior quarterback Matt Hunt scrambles during what turned out to be a 51-yard touchdown run Saturday during the 123rd Monon Bell Classic at Wabash College.
Banner Graphic/NICK WILSON