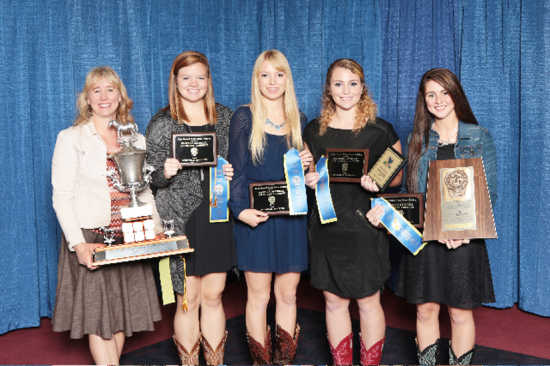 The Putnam County team is made up of Megan Arnold, of Coatesville; Whitney Boswell, of Fillmore; Adie Clifford, of Cloverdale; and Jessica Hays, of Bainbridge.

“I could not be more proud of their accomplishment,” team coach Lisa Pitts, of Greencastle, said. “Not only for the championship and the awards they have brought home, but for the hard work, dedication and leadership they have shown along the way. This is an outstanding group of young ladies, and it has has truly been my honor to work with them and watch them grow.”

The team won the state contest in May of this year, and then traveled to Louisville to represent the state of Indiana in the Horse Judging competition at the Eastern National 4-H Horse Roundup.

Twenty-three teams from around the country competed in this year’s contest in Louisville. Contestants judged a wide variety of classes in both halter (for conformation) and performance (riding). Following judging of live classes, contestants gave reasons (oral defense of their placings) on four classes.

Awards were given to the top 10 individuals and top five teams in the following divisions: Halter (conformation), Performance and Reasons as well as overall scores.

The team represented Putnam County and the state of Indiana quite well, across every division, bringing home numerous team and individual awards.

In the Performance Division, Hays placed fifth and Clifford placed third with the team earning a second-place finish.

At the end of the day, the team was euphoric to bring home the national championship for the state of Indiana, something that has not been accomplished since 1983.

The 4-H Horse Roundup provides a place for youth to compete nationally while encouraging teamwork and self-confidence, and while focusing on the 4-H Mission Mandates. Leadership is developed at these events by encouraging decision-making and teamwork skills, critical thinking, and independence.