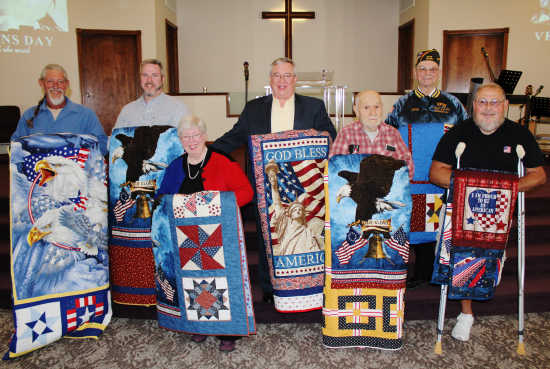 Banner Graphic/ERIC BERNSEE Recipients of Quilts of Valor in a ceremony Saturday afternoon at Lifespring Church west of Bainbridge are Daniel Wayne Boller, Kevin Andrew Wells, Sandra Wells, Richard A. Wells, Charlie Van Scoyk, Larry V. Miller and Jason Thompson. The quilts were created by the One Stitch at a Time quilt club following a quilt block contest at the Putnam County Fair.

BAINBRIDGE -- The heat of battle and the comforts of home came together Saturday afternoon in a touching Veterans Day ceremony at Lifespring Church west of Bainbridge.

Eight Putnam County service men and women were awarded Quilts of Valor in an inaugural event destined to end up an annual occasion if the ladies of the One Stitch at a Time quilt club have their way. 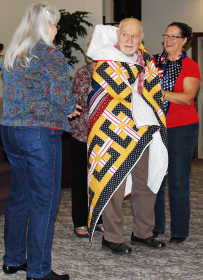 Banner Graphic/ERIC BERNSEE Getting all wrapped up in a Quilt of Valor, appreciative veteran Charlie Van Scoyk tells One Stitch at a Time quilt club members Jean Beilby (left) and Cindy Carter that they must have known he was cold during the Saturday afternoon ceremony at Lifespring Church near Bainbridge.

As each of those veterans came forward to receive his or her quilt, they were wrapped up in them by Jean Beilby, Claire Winings and Cindy Carter.

Such has become Cindy Carter.

Such has become the tradition of the Quilts of Valor organization that began in 2003 at Walter Reed Army Medical Center when a young Minnesota soldier who had lost his leg in Iraq was honored with the first Quilt of Valor.

The mission of the Quilts of Valor Foundation, the national group’s website states, is “to cover service members and veterans touched by war with comforting and healing Quilts of Valor.”

Each of the recipients Saturday was touched by the gesture. Both Kevin and Richard Wells suggested there were others perhaps more deserving but nonetheless proudly received their quilts.

Kevin Wells spoke of his grandfather’s service in World War II and the stories he had told, while Richard Wells pointed to members of the Roachdale VFW Honor Guard seated in the front row to acknowledge, “You all served much longer and sacrificed much more than me. This is a great honor.”

Van Scoyk, likely the oldest of the honorees, made his way from the very back of the church to the stage. And as the three women wrapped him in his quilt, he quipped, “You knew I was cold, didn’t you?”

Several wars and conflicts were represented by those honored Saturday. Miller was in Germany during World War II after enlisting when he was 16 or 17, Boller is a veteran of Afghanistan and Sandusky was in the Korean War.

Others were in the service during Vietnam and the Gulf War.

Wrapping up the sympathies of those around him, Pastor Gerron Ayento told the gathering, “It’s an honor just to be able to honor those who fought so diligently for our country.”

Joining members of the Roachdale VFW in assisting in the quilt ceremony were members of Greencastle American Legion Post 58.

Meanwhile, the quilt club is looking for more quilters and nominations of future veterans to receive Quilts of Valor, Carter noted.