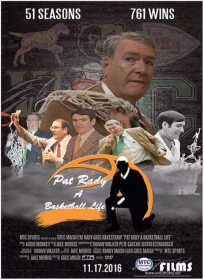 Premiere set for Thursday at Cloverdale

Cost: $5 (tickets may be purchased in advance at mtcsports.net)

Nevertheless, Maish is glad the project took place and is eagerly anticipating the premiere of the two-hour documentary on Thursday night at Cloverdale High School.

Rady is a Putnam County native who has coached at several different schools, and concluded his career with the Clovers in the spring of 2015 as the second-winningest coach in state history with 761 wins over his 51-year career.

He won sectional titles in six different decades, and is a member of the Indiana Basketball Hall of Fame.

MTC Sports has produced the film, and is a media company that offers livestreaming of high school events among its many services.

The company, originating in Mulberry (located northwest of Indianapolis), also has branched out into producing college sports programming at St. Joseph’s.

MTC is partnered with Endeavor Communications, which serves the Cloverdale community, and through that relationship the film was born.

“Endeavor has us to do their high school sports productions, and a couple of years ago we were on tap to do a high school basketball game,” Maish recalls. “Our normal routine is to call the coach beforehand, especially at a school where we have never been before, and let them know we’re coming to establish a relationship.”

Maish said such conversations are normally about 15 to 20 minutes in length.

“That one turned out to be about an hour and a half,” he said. “We talked about so many different things. Throughout the course of that communication, my office kept filling up with people. I had him on speaker, and by the time it was done we had four or five people in there just listening to him talk.” 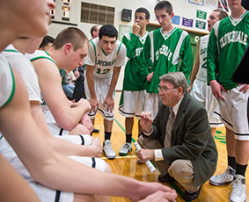 Maish had always had his mind the notion of brancing out into film production, and he knew after that conversation who the subject should be.

“He’s a very likeable person, and someone who you can build a trusting relationship witih very quickly,” he said. “He said he had a number of opportunities to do something like this in the past, and he always said ‘no’.

“We just crossed paths at the right time,” Maish added. “This is something we hope we can honor him with, since he gave us a peek into his life.”

Maish and his team interviewed 35 people for the film.

“When we first started, his sons [Patrick and Michael] each had a list of people we should talk with,” he said. “As we kept going, the list kept growing. As more people found out about it, they wanted to be involved.”

The film originated while Rady was still coaching at Cloverdale, but hit a delay and a reorganization stage when Rady stepped down from the bench.

“At the time, he was planning to keep coaching,” he said. “We have been on board watching the honors he has received since retiring, and now that he’s watching Patrick [his successor] take over his team.

“We were there when Patrick won the sectional last year, which was a pretty cool moment,” Maish said. “He’ll be the first one to tell you how hard it was to step down, but he was incredibly proud to see that happen.”

Rady hit the pinnacle of his success in 1991 while at Terre Haute South, when his team — led by future Indiana Hoosier and Big Ten Most Valuable Player Brian Evans — reached the Final Four in one of the last years of the single-class tourney system.

Through all his successes at one of the state’s largest and most tradition-rich schools, Rady always said he would end up his career at a small school.

“We heard that from many different people, including from him,” Maish said. “His passion for the game never changed from being at big schools or small schools. We heard a lot how great he was at adapting to his environment.”

Maish repeatedly stated his goal of honoring Rady’s accomplishments with the film.

He does run a business, though, and understandably hopes the film can earn some money at the same time.

“At the end of the day, we certainly want to be able to find that happy medium maybe wind up just a hair in the black,” he said. “We knew this wasn’t going to be a huge moneymaking endeavor, but we have invested a number of hours to make this possible. We hope to get a portion of that back.”

Maish, 41, has some recollections of the single-class system and high school basketball’s “glory days,” and says the film also satisfies a personal quest for knowledge with the film.

Maish said the process has not been without its pitfalls. He interviewed Jeff Lewis, a player on one of Rady’s sectional championship teams at Shelvyville.

Lewis passed away since that interview, as have former Rady friends and colleagues Jim Shaw and Mike Saylor during the past few years.

“We wanted to talk to coach Shaw, because his name came up very early in the process, but we weren’t able to,” Maish said. “At moments like that, it is a reminder of how grateful we are to be able to do this at the point where he and his family can enjoy it.”

The trailer for the film talks about his coaching record, but also adds the tag line “More Importantly... A Husband, Father, Mentor, Friend, and Man of God. Pat Rady has left a lasting legacy on everyone he has encountered.”

Maish emphasizes that Rady’s story is not exclusively told in terms of coaching wins and sectional trophies.

“It’s been pretty remarkable to me how he has been able to reach so many people in a positive way,” he said. “Consistency tells you about the character of a person, and that is something we have heard from so many people. He is so genuine and cares so much about people and their situations.

“That loyalty is what draws people to him.” 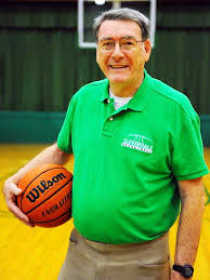 Maish said there is obviously the fiery and competitive nature of Rady that showed up on the sidelines for more than five decades.

“His faith is a big part of his passion for people,” Maish added. “He gets into the inner circle with people and makes them feel so special.”

Maish considers Rady as one of the few remaining links for people today to be able to connect with the stories history of Indiana high school basketball.

“There are stil some others out there, but they are getting less and less,” he said. “To me, as an Indiana high school sports fan we need to grab ahold of those guys and enjoy what the can offer about where we have been in the sports world.”

The film will be available for purchase on DVD, and Maish has been so caught up in the production that he hasn’t had time yet to work on other distribution possibilities.

Once the premiere takes place on Thursday, he will begin to look into other avenues to spread Rady’s story to those who don’t know it.

“We have considered Fox Sports Indiana as an option,” he said. “We have talked about doing a theater run in the Terre Haute area.

“We would like to find a home for it,” Maish added. “We have put it together so it could be shown in four 30-minute segments if we want to do it that way.”

Maish was still putting the final editing touches on the project last week, and is hopeful for a great turnout at the premiere this week.

“We hope there is a good crowd on hand,” he said. “It’s kind of a risk for us to step out and have faith to do that, but we have heard of a lot of people who are interested. We hope they enjoy it.”

Education: Graduated from Roachdale High School in 1959; Hanover College in 1963 and earned a MS degree from Indiana State in 1970

Coached the Indiana All-Star Team in 1989

Has received various coach of the year honors and won conference championships.

Past President of the Indiana Basketball Coaches Association

Has been a presenter at clinics in Indiana, Illinois, Oregon and Canada.

Elected to the Hanover College Athletic Hall of Fame in 2001.

Elected to the Indiana Basketball Hall of Fame in 2002.

Elected to Terre Haute South Hall of Distinction in 2009.

Elected to Montgomery County Basketball Hall of Fame in 2014

Chosen as Indiana’s nominee for NFHS national basketball coach of the year – October, 2014