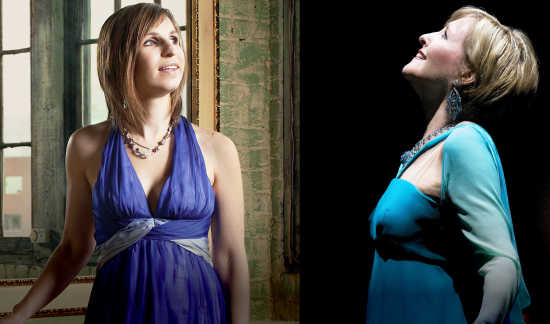 For the final Green Guest Artist Concert of the fall semester, Frederica von Stade (right) will present a program of songs and duets with fellow mezzo-soprano Laurie Rubin (left) and pianist Jenny Taira. The concert will be given Saturday, Nov. 19 at 7:30 p.m. in the Green Center's Kresge Auditorium at DePauw University.
Courtesy photo

Among the wide array of live music on offer in Greencastle between now and Thanksgiving is a special highlight of the Green Center season.

This week the DePauw University School of Music will host one of the most beloved artists in the classical music world, mezzo-soprano Frederica von Stade, who will present the next in the series of Green Guest Artist Concerts with fellow vocalist Laurie Rubin and pianist Jenny Taira at 7:30 p.m. Saturday, Nov. 19.

“She has always been a favorite with international aficionados who appreciate style, quality, sensitivity and versatility,” Martin Bernheimer wrote of von Stade when she performed with Rubin at the Ravinia Festival last fall.

For Saturday’s performance at the Green Center, “Two Mezzos in Concert: An Evening with Frederica von Stade and Laurie Rubin,” the artists have prepared a program of songs and duets from the classical to cabaret settings, including groupings with such enticing titles as “Can’t Go Wrong with Mozart,” “Mothers and Daughters,” “Let’s Hear for the Boys,” “We Love Paris,” closing the concert with a cabaret set including a piece written by Rubin and Taira.

Von Stade has enriched the realm of classical music for more than three decades; Rubin is much admired not only for her own work and interpretations by 21st-century composers, but also as author of “Do You Dream in Color? Insights from a Girl Without Sight.”

Blind since birth, Rubin, who is 37, has appeared in New York’s Carnegie Hall and London’s Wigmore Hall, receiving high praise from critics, including The New York Times, which describes her voice “earthy, rich and poignant.”

“(Laurie) is amazing,” von Stade said for the San Francisco Examiner, “a combination of a beautiful voice, a great sense of music and the most wonderful spirit of generosity. What is miraculous is her light, which is all the more amazing as she’s lived in darkness.”

Earlier in the day Saturday, from noon to 2 p.m. in the Green Center’s Thompson Recital Hall, von Stade and Rubin will offer a joint master class with DePauw School of Music students, which is open to the public to attend free of charge.

General admission to Green Guest Artist Concerts is $15 in advance and $20 day of the event. Tickets for seniors, youth and all students are free.

For online purchases, visit the school’s website at music.depauw.edu. The venue’s box office is also open beginning one hour prior to every ticketed performance.