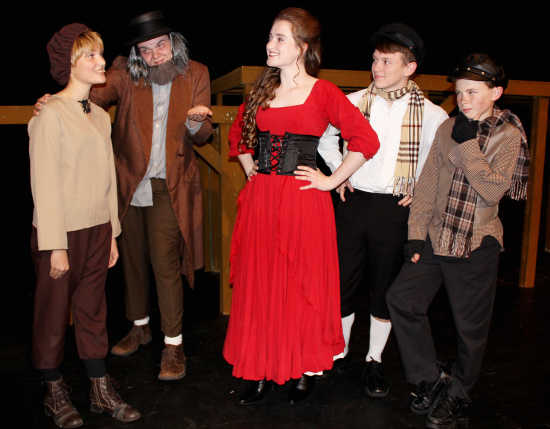 Oliver Twist (played by Arianna Pershing, left) is welcomed into the gang of thieves by Fagin (David Maginity) and Nancy (Michaela Semak, center) while the Artful Dodger (Donovan Asbell) and his sidekick Charley Bates (Andrew Adams, right) watch with varying degrees of approval in the Greencastle High School production of “Oliver!” The musical is set for 7:30 p.m. Thursday, Friday and Saturday on the Parker Auditorium stage in McAnally Center.
Banner Graphic/ERIC BERNSEE

This time of year we tend to think of the beloved Charles Dickens story “A Christmas Carol.” But Dickens also wrote a famous novel about a poor orphan born in a workhouse in London, adopted by a gang of thieves then rescued by a well-to-do man who turns out to be his uncle (his grandfather in the play version).

“Oliver!,” the musical adaptation of this story by Lionel Bart, takes to the Greencastle High School stage Thursday, Friday and Saturday at 7:30 p.m. in Parker Auditorium of McAnally Center.

During yet another meal of gruel, Oliver Twist (played by Arianna Pershing) has the audacity to ask the Beadle of the workhouse Mr. Bumble (played by Joe January) for more gruel. The request sets Bumble into a rage, so he decides to sell Oliver for seven guineas, “that or thereabouts.”

Funeral parlor owners Mr. and Mrs. Sowerberry (Michael Thede and Jessica Walter) decide to purchase Oliver so he can become a coffin follower. That lasts only until Oliver runs away and is found by Charles Dawkins, otherwise known as the Artful Dodger (played by Donovan Asbell). Dodger persuades Oliver to follow him to meet his caregiver Fagin (David Maginity), an old man who runs a “training academy” for young pickpockets.

While in Fagin’s care, Oliver also meets an evil thief named Bill Sikes (Addison Hughes) and his girlfriend Nancy (Michaela Semak). Shortly after meeting them, Oliver goes out on his first pickpocket assignment with the rest of the boys, panics and runs away from an angry mob. Fortunately, he is caught and taken in by a nice man named Mr. Brownlow (played by Nick Geiger) who turns out to be his grandfather. Unfortunately, however, Oliver is kidnapped by Sikes and Nancy and returned to the den of thieves.

For those unfamiliar with the story, the ending will be a surprise with some shocking moments as well as some touching and humorous scenes.

The show is directed by GHS theater director Bethany Bax with musical direction by Debby Lambert. The choreographer is Lori Briones and tech director is Robert Hedge.

The show has a large supporting cast and crew, including Greencastle Middle School students.

Tickets are $7 and can be purchased at the door or during show week from the GHS bookstore.