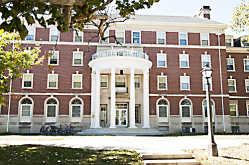 No students were injured in a small early-morning Tuesday fire at a DePauw University residence hall.

At 3:12 a.m., the Greencastle Fire Department was dispatched to Mason Hall at 402 E. Anderson St. on the report of a fire alarm.

Fire crews arrived two minutes later and began a search of the building. They discovered light smoke in Room 310, with the sprinkler system having already extinguished a small fire.

Greencastle Fire Chief John Burgess reported the fire appears to have originated from a piece of electrical equipment, but the case remains under investigation.

The fire and sprinkler activation were contained to a single room, with an estimated $20,000 in damage occurring due to water.

Burgess reported no structural damage, noting that the sprinkler system performed its function of containing and extinguishing the fire.

The alarm led to the evacuation of the building. In an early morning email to faculty and staff, university president Mark McCoy reported that many students went to the Memorial Student Union Building or other campus structures.

McCoy further stated that a total of 140 students are housed in Mason but many had already left campus for Thanksgiving.

“As a campus, let’s give thanks for the fact that everyone is safe,” McCoy wrote to the staff, “and that is in large part to the great work of the Greencastle Fire Department, campus police and our caring and capable student life staff.”

Firefighters remained on the scene until 6:14 a.m. The building was reopened to students later Tuesday morning.

Mason Hall is a four-story structure situated on the Ubben Quad of the DePauw campus.

While false alarms are common in DePauw structures, longtime members of the campus community know they are not something to be taken lightly.

In April 2002 Rector Hall, which had been adjacent to Mason Hall, was destroyed by fire.

Although all students escaped safely, a pair of firefighters were injured in the large blaze that required 12 departments to combat.

The Rector Hall fire was caused by an electrical problem.