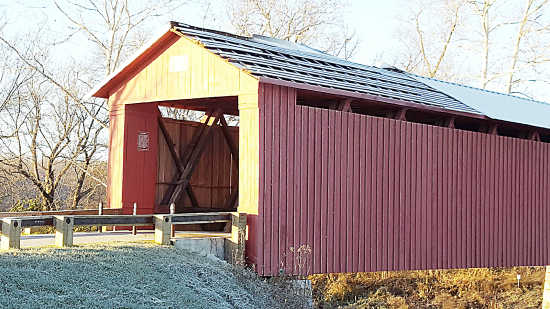 The Friday storm that passed through Putnam County caused fairly minimal damage, but did victimize the roof of a local historic landmark.

High winds that came as part of the Friday evening storm tore a large section of metal roofing from the east end of Houck Covered Bridge in northern Washington Township.

Having formerly served as a crossing point of Big Walnut Creek on County Road 550 South, the 136-year-old bridge was rehabilitated and bypassed two years ago in favor of a bridge that crosses immediately to its north.

Not long after it was reopened as a walking bridge, Houck was the victim of graffiti vandalism but the latest damage is purely an act of god.

One wind gust of 54 mph was measured locally during the Friday storm.

Ricketts told the commissioners he has already reached out to contractors about fixing the roof.