At least one issue resolved in park water leak situation 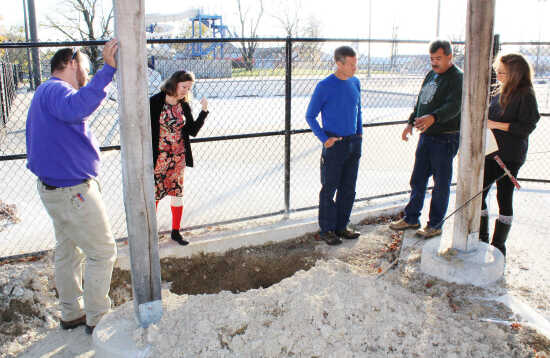 Examining the area of the water leak discovered beneath the east side of the city pool and the splash park at Robe-Ann Park, Greencastle Park Director Rod Weinschenk (second from right) discusses the situation with City Engineer Garth Hughes and Park Board members Cathy Merrell (right) and Beva Miller as Assistant Park Director Phil Cornelius (left) looks on.
Banner Graphic/ERIC BERNSEE
Order this photo

Even after getting nearly $12,000 in sewage bill relief, Greencastle Parks and Recreation Director Rod Weinschenk wasn’t the least bit jovial about discovering a pool deck leak that resulted in 1.3 million gallons of lost water.

“It’s nothing to laugh about, we lost a tremendous amount of water,” Weinschenk told the Board of Public Works, which unanimously approved a $11,778 adjustment to the park’s sewage bill at its November meeting.

The Parks Department will pay the $329 for its two typical months of sewage while the $11,778 is written off in a one-time adjustment that is allowed all water users by the city. It also will pay the entire water bill of $4,429.57 for the two-month period. Normally the park water bill is $770 a month in season.

Weinschenk is still at a loss for how the leak occurred beneath the eastern edge of the main pool deck and the splash park deck at Robe-Ann Park. And he’s even uncertain where that much water could have gone, although he has a good idea.

“We lost 1.3 million gallons of water,” he told members of the Park Board at a special meeting last week at the splash park to brainstorm on how to fix the leak. “We still don’t know where it all went.

“I figure we raised that quarry (on the opposite side of Wood Street) level by about this much,” the park director said, pointing east and holding his thumb and forefinger about an inch apart.

After Huber and Sons was called in to dig out the corner section of concrete at the splash park -- four feet wide and 56 inches deep -- it seems apparent that the underground hydrant was damaged somehow (perhaps by limestone chunks vibrating against it underground) and created the leak. When Weinschenk discovered the leak three weeks ago, he said he could hear the water running as he stood on the splash park deck.

He reasoned the escaping water took the point of least resistance through the limestone and wound up across the street in the quarry, although when he walked along the east side of Wood Street outside the quarry fence he didn’t find anywhere that water had pooled up.

Cutting the hole in the concrete was about a $1,200 job so far (not including replacing the concrete), he said, with about another $8,000 estimated to further cut into the deck and suck more dirt out.

City Engineer Garth Hughes proposed another idea, noting that the uncovered hydrant “is junk now” and there exists another similar problem on the deck near the entrance to the women’s bathhouse.

He proposed digging a hole in the grassy area along the Wood Street side of the pool and boring under the deck to run a new waterline while bypassing the problem areas.

“My idea is to quit cutting concrete,” Hughes stressed. ”It costs too much money to put back.”

Representing the Greencastle Civic League, which raised funds for the splash park project, Emily Jones wondered about the “integrity of the shelter” located near where the concrete was cut out.

She was assured it would be fine without further excavating there.

In a special Park Board meeting Tuesday night, Joe Spiker Excavating was approved as the low bidder at $8,400 to remedy the situation by excavating a hole in the grass along Wood Street to find the existing waterline and then cutting a hole in the concrete outside the women’s bathhouse and boring under the pool deck and running a two-inch line sleeve from one spot to the other. The project will also replace existing valves in those areas.

Spiker’s proposal, one of five estimates sought for the work, was approved unanimously by the board after a motion from Tim Trigg.

Weinschenk said that winterization of the pool house will depend on the project. He’s been holding back winterizing the aquatic center until the leak has been remedied.