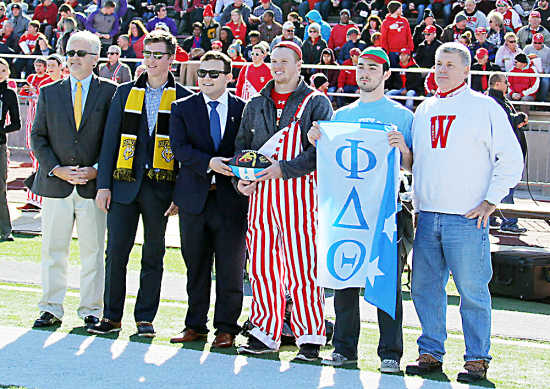 Having raised $31,000 for the ALS Association in the process, representatives of the DePauw and Wabash Phi Delta Theta chapters present the game ball prior to the 2016 Monon Bell Classic. Presenting the ball are (from left) adviser C.J. Johnston and Jack Rotman and Michael Kolbus of DePauw, along with Bryan Roberts, Austin Rudicel and chapter adviser Jim Dyer of Wabash.

CRAWFORDSVILLE — Having raised $31,000 for the ALS Association in the process, members of DePauw University and Wabash College Phi Delta Theta fraternity chapters presented the game ball to officials prior to the start of the 122nd Monon Bell Classic football game on Saturday, Nov. 12.

The ball was relayed on foot and bike between the two campuses the day before in advance of the classic.

“The idea is to raise both awareness and funds for our international fraternity charity, the ALS Association,” DePauw chapter president Jack Rotman said. “In addition, it help sets a tone for the respect we have for the event and the competition.”

ALS — commonly known as “Lou Gehrig’s Disease” — is a progressive neurodegenerative disease that attacks nerve cells and pathways in the brain and spinal cord. As many as 30,000 Americans may currently be affected by ALS.

The ALS Association is the only national non-profit organization fighting this disease on every level.

Since the “Iron Man” Lou Gehrig was a member of Phi Delta Theta, the fraternity has adopted ALS as its international charity.

DePauw Phi Delt Little 5 bike riders transported the ball halfway between Greencastle and Crawfordsville. Then a team of Wabash Phi Delt runners took it the rest of the way back to the home of this year’s contest.

“This is the fourth consecutive year for the event” Wabash Chapter Adviser Jim Dyer said. “This year, we’ll eclipse $31,000 in donations to ALS Indiana. We are grateful to DePauw’s and Wabash’s athletic directors for their support of this very positive event.”

Those intersected in learning more about ALS or wishing to donate may visit webin.alsa.org