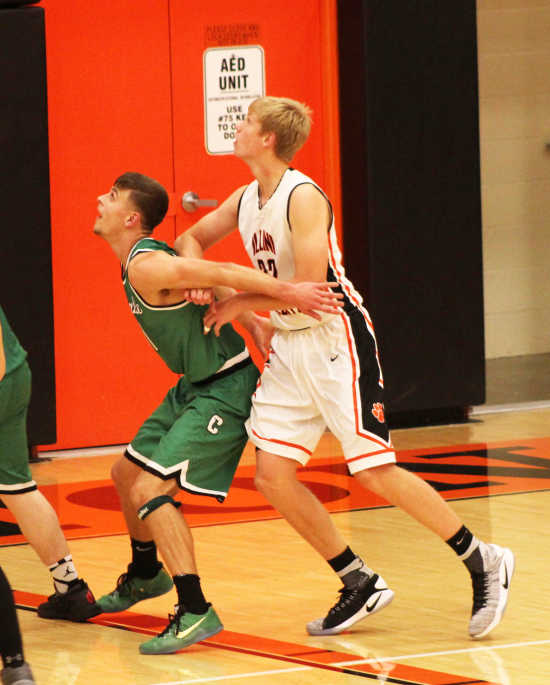 Cooper Neese of Cloverdale blocks out Taylor Bruninga of Illini Bluffs during Tuesday night's game at Washington, Ill. Bruninga had 37 points and Neese 30, as the Clovers won 76-68.
Banner Graphic/Joey Bennett
Order this photo

WASHINGTON, Ill. — At halftime of Cloverdale’s game against Illini Bluffs in the Tournament of Champions on Tuesday night, anyone would have been excused if they thought the worst fear for the Clovers was playing out.

The fear was that Cooper Neese and Jalen Moore would have to outscore the entire opposing team practically by themselves this year in order for the team to win against good opponents.

The Clovers held a 37-26 halftime lead, and the team’s scoring duo had all but five of those points.

Neese had five points in the first quarter, while Moore led the team with eight before picking up his third foul with a couple of minutes left in the quarter.

Those were the team’s only 13 points. 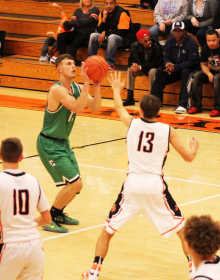 Neese stepped up and poured in 19 in the second quarter, hitting almost all of his shots and putting on a show for the crowd. Nick Winders added a 3-pointer and Jake Wilkes had a pair of free throws.

Still, the needed balance was not there.

The third quarter was different, though. Seth Pfaff got the team’s first basket of the half, and Wilkes added eight more points. Neese had just one basket, and Moore had a pair of free throws and a trey.

“It was great those guys were able to score,” Neese said. “We knew they were capable. Jalen and I didn’t have to score as much, and it was great to have that.”

Coach Patrick Rady thinks the game showed a lot of positive steps forward for his team.

“This was a great team win,” he said. “That’s probably the thing from last year to this year where you saw some growth and maturity in our entire team.

“Nick went to the boards well and got nine rebounds, hit a big three and a couple of free throws,” Rady added. “Jake Wilkes gives us energy and got some deflections on balls and Seth gives us size inside. Parker Watts and Jarren Rossok coming off the bench were huge.”

Rady’s team hit 25 of 31 free throws, and he was pleased with both of those numbers.

“We’ve been talking about how we need to get there more,” he said. “It was great to get there so much and to knock them down.”

He felt his team did not get to the free throw line enough last season.

“You can’t live and die by the three, and we don’t want to make that a crutch. Last year at times we did.”

Several neutral fans near my seat were constantly in awe of the show “the Butler guy” was putting on with his long-range shooting, but Rady isn’t sure that was even his best contribution on this night.

“Defensively, we definitely showed urgency from our kids on the defensive end,” he said. “Cooper did a great job on [6-8 Taylor] Bruninga. I know he scored 37 points, but especially in the second quarter when we were able to make our run

“Cooper did an outstanding job on him,” Rady said. “He wanted that matchup and he wanted to guard him.”

Bruninga had only four points in the crucial second period, when the Clovers could have been on the ropes without Moore available but dominated the quarter by a 24-11 margin to take a 37-26 halftime lead.

The third period was played to a 17-17 draw, and it seemed the Clovers were going to cruise to an easy win before the Tigers made their comeback.

Bruninga had 19 of his 37 points in the final period on six baskets and 7-of-7 at the line.

Moore had 13 of his 25 in the period, most from the line, as the Clovers were able to hold on for the win.

The week-long event included several games like this one, which were just individual games, while other parts of the schedule included teams from South Carolina, Virginia, California, Tennessee, New York and Kentucky. Those teams, plus the top Illinois teams, were playing through a bracket to an eventual winner.

Rady was pleased with the way things worked out.

“It was great to start off with somebody that we didn’t really know anything about,” he said. “It was a festive atmosphere, and it had kind of a tournament buzz. The whole thing was a good experience for our younger guys.”

Cloverdale does not play again until Dec. 2, a 10-day span helped by this outcome.

“Had we lost, that would have been a long time to practice coming off a loss,” Rady agreed. “Our guys said they couldn’t wait to get back into practice and fix the things we didn’t do well. We were pleased with the win, but the kids weren’t satisfied.”

Neese said he thought he played “all right,” but felt he shot poorly.

“I still have to work on defending,” he said. “Taylor was a heckuva player to guard being 6-8. Offensively, I have to let the game come to me. I had some stupid turnovers in the second half.”

Neese has worked hard on his body in the off-season, and the work clearly showed.

He has increased his weight to 188 pounds without losing the flexibility to still have a smooth shooting touch (can you say “Jimmer Fredette”?).

Besides shooting several lengthy threes from far beyond normal range, Neese had another individual play that brought reactions from the crowd.

Illini Bluffs was utilizing an ineffective full-court press in the second half, and Neese was bringing the ball up the court.

He was about halfway between the 3-point circle and the midcourt line in the backcourt, and effortlessly threw a bullet pass off the dribble approximately 60 feet to a wide-open teammate for a layup.

Neese’s quickness has also improved, as he frequently put the ball on the floor and was able to blow past some quick Illini Bluffs defenders.

“It was great to come to play in a different state with my school team,” he said. “I’m used to it in AAU, but this was a great experience for all of us. I appreciate them inviting us, and it was a huge honor to be here.”

Neese agreed with his coach on the next step.

“Our ultimate goal is a state championship,” he said. “We played pretty well for our first game, but we have things to work on.”