Al Tucker proud to follow son into Hall of Fame 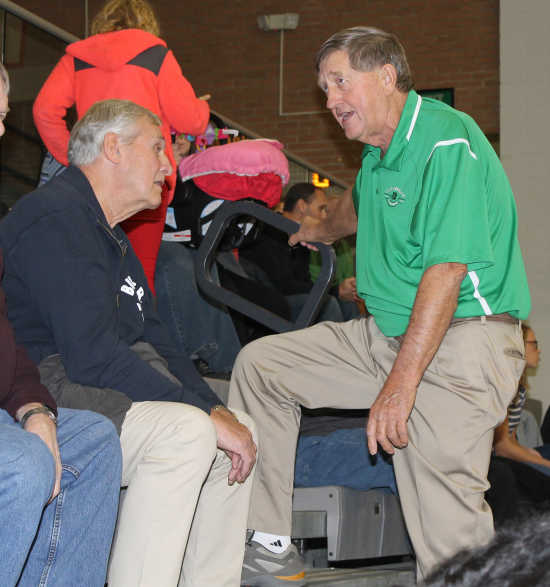 Many sons dream of the day they can follow in the footsteps of their fathers.

In Al Tucker’s case, the longtime Cloverdale basketball coach flipped that scenario when he followed in the footsteps of his son Chad on Tuesday and was named as one of 12 inductees for the Indiana Basketball Hall of Fame’s class of 2017.

Chad Tucker, who had been inducted in 2013, played for his father scored 1,338 points with 600 career rebounds. He went on to set the all-time scoring record at Butler with 2,321 points, which still stands, and also graduated as the school’s fourth all-time leading rebounder (689) and eighth in career assists (206).

“The Tuckers are one of a limited number of father-son inductees into the Indiana Basketball HOF,” he said.

Others included in that group are the Shepherds (father Bill and sons Billy and Dave), the Powers family (Jim and Jim Jr.), the Mendenhalls (Murray and Murray Jr.), the Mounts (Pete and Rick), the Colescotts (Jack and Dave), the Greens (Ray and Steve) and the Eskews (Phil and Phil Jr.).

Tucker was genuinely honored by his selection.

“I’ve known it for a couple of weeks, but I was sworn to secrecy,” he said. “I’m not very often speechless, but I’ve kind of recovered from the initial shock — I was stunned, humbled and overwhelmed. Surreal may be the best word to describe what I feel. I’m really ecstatic about the whole thing.”

Tucker’s coaching career ended more than 30 years ago, and he feels if he had not stayed active in the game that he would not have received the prestigious honor. He has continued to promote basketball through the Indiana Basketball Hall of Fame.

He was really pleased five or six years ago when he was asked to join the Hall of Fame board of directors.

Tucker has many responsibilities in his job on the Hall of Fame board, including helping to choose the Silver Anniversary team honoring players from 25 years ago, helping choose the teams to participate in the Hall of Fame Classic tournaments for both boys and girls played each year in late December.

“One of the most rewarding things was when I volunteered to contact two boys who I know very well from Owen Valley [Shawn Parrish and Greg Wright], and I made the first call to them letting them know they were chosen for the Silver Anniversary team,” he said. “That’s rewarding to me to do that. Another young man I called was Kenny Rowan, and I knew his dad [Will] from playing at South Putnam.”

Tucker, who is retired and lives in Cloverdale, also attends directors’ meetings every other month and also helps coordinate a Hall of Fame golf outing in Washington each summer.

“A lot of it is social, but there is some administration involved in keeping the basketball Hall of Fame open, alive and doing well,” he said. “Had I not stayed involved with the Hall of Fame and the community, I never would have made it. Actually I never expected to make it any way.

“When they named the court after me at Cloverdale last year, my kids told me I should update my credentials,” Tucker added. “The rest is history.”

The fact that he will be enshrined in the same place as his son, who passed away in 1996, is also special for Al Tucker.

“That is absolutely a double honor, if you will,” he said. “I thought at some particular time there was no doubt that Chad would be included in the Hall of Fame. One of his friends and competitors in high school and college told me that I should nominate him for the Hall of Fame. I told him if he wanted to, he should, but that wasn’t something I would do since he was my son. He did that, and in his second year [of eligibility] Chad was selected.”

Al Tucker still makes it to as many Clover games as he can, and holds the distinction of being one of the few people to witness 53-point performances by Rick Ford of Cloverdale in 1968 and current Cloverdale star Cooper Neese on Saturday at Southmont.

Neese became the all-time boys’ scoring leader in Tuesday night’s win over North Central, and was named the District 2 “Player of the Week” after averaging 45.0 points in two victories last week.

“In both cases [Rick and Cooper], it’s more about if you won the game [Ford won his game],” Tucker said. “I talked to Rick [Tuesday], and got a call from Jerry Lewis in South Carolina and we had a great conversation. It’s been a great week for Cloverdale basketball.“

Amazingly, Ford — who went on to have a standout career at Indiana University after his Clover career — is not yet a Hall of Famer.

“I’m not on the final voting, but I’m one of the people who screens the nominees,” Tucker said. “I can vote for 25 people to get on the ballot, and we have a list of names between 300 and 400 people who are considered. New people become eligible every year, and they are added to that list.

“Hopefully Rick will get in someday,” he added. “He was an outstanding player.”

Among the inductees with Tucker next spring in the Hall’s 56th induction class will be two recognizable names in their first year of eligibility. Glenn Robinson led Gary Roosevelt to the 1991 state title, defeating Alan Henderson’s Brebeuf Prep team in the championship game. Both Robinson (Purdue) and Henderson (Indiana) had lengthy pro careers after stellar college performances.

Tucker is a 1957 graduate of Patricksburg High School (now Owen Valley), and served in the U.S. Navy before enrolling as a student at Indiana State University. He was hired as the junior varsity coach at Cloverdale in 1964, working on the staff with Hall of Fame coach Jim Miller for their 1965 regional champion and 1966 state finalist teams before taking over the program in 1967.

An agent with State Farm Insurance for 23 years, he has been recognized by ISU as a recipient of its “Coaching Alumnus of the Year” award. In 2015, Cloverdale named its basketball floor “Tucker Court.”

Reservations are available online now or through mail order in early 2017. Call the Hall at (765) 529-1891, visit www.hoopshall.com or email info@hoopshall.com for more information.

• Archie Chadd, player at Bainbridge (inducted 1963) — Assistant coach of Butler University’s national championship team in 1929 after a successful tenure as a high school coach in Illinois, moved to Anderson High School in 1933 ... won 8 sectionals, 6 regionals and 3 semifinals and state championships in 1935 and 1937 ... Indians also made state finals in 1936 also served as Anderson athletic director and later as superintendent of Anderson schools 1942-1951 ... 4-year regular for Bainbridge High School, then standout player for Tony Hinkle at Butler University, where he was captain his senior year.

• Marion Crawley, coach/Greencastle (inducted 1964) – During a 35-year coaching career, his teams won 644 games ... career included 7 years at Greencastle and 4 at Washington ... won 2 state crowns at Washington, 1941 and ‘42 ... 2 more at Lafayette Jefferson, 1948 and 1964 ... won 32 sectionals, including a record 23 straight during his 24 years at Jefferson ... 21 regionals, 14 semistates and 3 state runner-ups ... doubled for many years as Jefferson’s athletic director ... as football coach also compiled 93 victories, 5 conference titles and a number-one state ranking in 1950 ... the first executive director of the Indiana Basketball Coaches Association.

• Tom Goldsberry, coach at Greencastle (inducted in 1984) – Achieved a 39-year coaching record of 529-382 ... 16 sectional titles, 10 of those at Greencastle ... his Greencastle teams won back-to-back Wabash Valley championships in 1956 and ‘57 ... beat top-ranked and undefeated Terre Haute Gerstmeyer en route to one of those crowns ... 2 regional championships ... all this despite the fact that he didn’t participate in sports at Greencastle High School, where he was graduated in ‘31, or at Central Normal College ... coached 2 years at Bridgeton, 3 at Ellettsville, 13 at Greencastle and 9 at Union City ... closed out his career as South Putnam Athletic Director.

• Jess McAnally, coach at Greencastle (inducted 1972) – Won the 1932 Gimbel Award (forerunner of the Trester Award) as a junior, an unprecedented achievement ... his Greencastle team went to state finals 3 straight years ... lost to Martinsville in ‘33, despite fact that McAnally controlled every center jump ... also runner-up in ‘31 to Muncie ... in ‘33, lost in semifinals to New Castle ... moved on to Northwestern, lettering as a sophomore ... died a year later following an infection ... honored by the people of Greencastle, with the city’s auditorium-gymnasium used for high school and college games named in his honor ... named to Herb Schwomeyer’s consensus all-time team of 1926-40.

• Al Tucker, coach at Cloverdale (to be inducted 2017) – Was on staff with HOF coach Jim Miller for their 1965 regional champion and 1966 state finalist teams before taking over the program in 1967. Over a 17-year span, his teams established consistent success, winning 256 games, seven sectional championships, one regional title and five 20+ win seasons. He led his team to the 1982 Hall of Fame Classic and coached Indiana All-Stars Rick Ford and Chad Tucker.

NOTE: The possibility exists that additional Hall of Fame inductees may have Putnam County ties besides those listed here.